News at Ten - the come back er kid, no grandpa returns 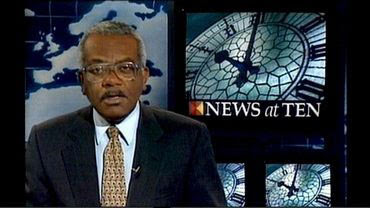 Reassuring, velvety, cosy and the right sort of boyfriend if it were one to bring home to mum and dad.

Some traditions are hard to beat and next week an institution returns like the prodigal son to make us feel greatly British again.

News at Ten in its hey days commanded British news' attention like the British did with its empire circa 1900s.

But then they the execs tweaked, tinkled and eventually put the programme to bed, permanently, or so we thought.

me even argued News at Ten delivered big audiences because of the bouquet of programmes before it; the legacy of a film's audiences bode well.

But then the presenter Sir Trevor Macdonald - a mild mannered, thoroughly decent veteran broadcaster in the family of Cronkite and Alistair Cooke - could stake his claim for the show's huge appeal.

We loved and love Trevor.

Oh boy we loved him.

We loved him so much so that the coup de grace for the incumbent News at whatever time it's at.. what !

Where was I, yes the coup de grace of the news at the moment should not hurt.


The mac is back

So News at Ten is BACK.

We could write a thesis about this.

ITN despite its many relaunches resurrects an old favourite seeped in nostalgia and that key word used in news world: TRUST.

It's signature was the gongs and the carbon template style of US news presentation - a single anchor made to look like the joint chief of staffs - the pulse of the world in his fingers.

But this is a gamble worth watching.

Because when News at Ten reigned we were but a cell, no a mitochondria, in the web, never mind web 2.0's awesome publishing galaxy.

Back then we would still wait patiently to see the world at Ten, rather than as it happens.

And the world was nary compressed from all the satellite and streams of news feeds doing the rounds.

If its broke say news execs, fix it.

News at Ten is launching in the middle of an information war, where paradigms have imploded in black holes and no one, exec or otherwise, has the Midas thing to guarantee huge audiences.

If News at Ten gets the numbers watch out for a raft of oldies coming back.

Dr Who - you ain't seen nothing yet.

If it fails to live up to the hype, there will be eggs gushing of the face of many execs and someone somewhere who came up with the idea will fall on a whacking great sword.

There will also be mirth and much dancing behind ladles of wine and rum from frienemies (friends who are in fact your enemy.

Ask any news exec in the UK at the moment about News at Ten's relaunch and a majority will welcome it with open arms, and a dagger hidden in their belts.

You see they'd be willing it to work, so they can bring back their old brands without taking the hits if it fails.

On the other hand they wish it wasn't back, at least till they could relaunch their shows, but won't because of fear of failure.


Will it be a success or failure?

So will it be a success or failure?

But this is certain, the dynamics have changed, and five million per night will be welcome to the ten million it attracted not too long ago.

It's trade mark.. "and finally"- a homage to amusing sometimes witty stories which is to news like I am an Inuit (shoosh don't tell anyone) will be lifted to youtube even before the final credits run.

Sir Trevor will receive hordes of messages welcoming him back, one of which from his bosses will be a healthy wad of...(mustn't get vulgar now)

Will News at Ten work?

News at Ten, News anywhere may not be the problem, but the language of engagement, the lingua franca of its communication visually and literally.

Sadly not as much the bosses might hope, because those halcyon days, those golden days of the news brand is the stuff we read to our nieces and nephews at bed time.

News at Ten rearranged to News (on the) Net might be a different proposition.

But then that means I have got another 300 words to write.
Posted by Dr David Dunkley Gyimah at 7:12 pm