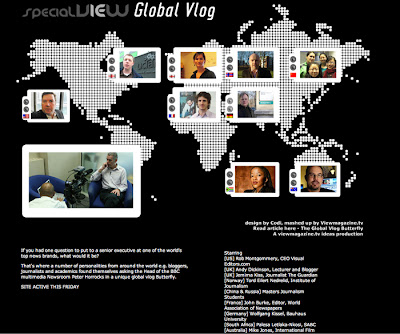 It was an ambitious idea, but when I finally secured the interview of the BBC's Head of Multimedia Newsroom, I had the idea in mind.

I contacted a few friends and colleagues around the world. If they could pose an idea to the head of BBC's News what would it be.

We oomed a bit, some were straight of the bat, but all chipped in.

Ahh but the question had to be on video.

Yet still they persevered and then eventually via FTP and send it, the videos came through.

Peter Horrocks gave me considerable time for the interview, and I'm grateful for that.

And he answered all the questions.

That was the fun bit.

Now I'm encoding the video and building the application in Flash.

It should go Live with all the interviews on Friday and if I can say so myself, some insightful questions yielding absorbing answers.

If you work for the New York Times, then you'll be pleased at a segment of our interview.

Thank you to all that participated and to those that did not make it this time.

A Vlog Butterfly is a wonderful way to extend the value of an interview both in video, ( the clips are being sent to the respective authors) and giving ownership to smaller sites competing for attention in this blog-theatre.

I'm looking forward to showing this at a number of conferences I'm presenting at including Apple, World Editors Association, Berlin and Cultural Exchange.

The film which shows the behind the scenes interview with Peter Horrocks as well as an indepedent film on multimedia in conjuction with Dominic from the Press Gazette should be completed at some point.
Posted by Dr David Dunkley Gyimah at 8:38 pm

This sounds amazing. Look forward to seeing it when its live!

David - so what's it take to become involved with this little project of yours??? ;-)

Email me about Chicago this May for the VizEds Adv workshop - looking forward to finally meeting.