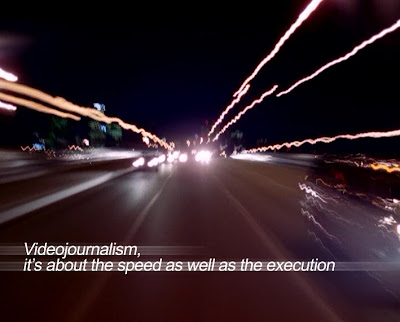 Vjism - nimble, less load, small, if you're not fast, what's the point?
It's not that as a videojournalist you'll necessarily be quick. The project has a lot to do with it and I believe so does your experience, which comes from developing a critical eye c.f Cahiers du Cinema.

Truffaut et co studied so much cinema, that they were ready to go it alone sans baggage.

There is no substitute for experience and bloody mindedness. The film isn't finished until its finished and then some.

If you've never done a TDB, till day break, you're missing something.

No I'm being facetious. But a televisual mindset heightened by VJ practice, knowing appropriate short cuts and techniques goes some way in alleviating deadline nerves.

In part and I've had this confirmed by many of the former C1 videojournalists, shooting 2 sometimes 3 stories a day over years, varying from politics to crime quickens the senses.

And there are praxis exercises I use in advanced videojournalism e.g. Track & Rushes, Image-syntax etc. for those who already know how to shoot and are looking for speed.

In Norway, as an exercise approaching an interviewee cold, it took 9 minutes in total from an initial meeting to the interview being online.

Here's one I demoed in Podgorica - Macedonia

And here's the result with effectively little editing

Now there's no bravado in speed if that compromises professionalism. That's not what this is about.

Tomorrow I'm going to test that theory for the umpteenth time again. The Obama Video I have made for the Orchestra will have to be redone in a matter of minutes, as new stronger material has been pledged.

Recent Updates (August 2010)
Lots of interest in this short piece, so I wanted to update you.

The Obama Piece took three hours to do before the main orchestral performance. You can see that on viewmagazine.tv after the preview on the site illustrated below 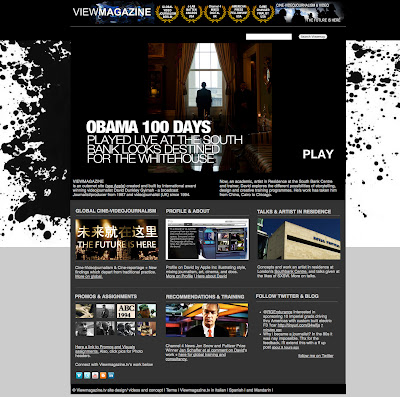 The issue is a balance between the premeditated which TV often subscribes to; the researched item must fit the shoot, and looking for and interpreting fresh material.

I remember reading a review of Japanese actor-director Takeshi Kitano and his fim Brother in which actor Omap Epps said he was amazed at how many scenes they'd get through in a day. Kitano, shot one scene, got his cover shots and moved on.

Similarly if you liken cinema to a language, as James Motano in How to read a film does, you can begin to understand how n improves ones skills. I have spoke about this at length on other posts. Also see the Matrix Lecture for approaching a subject sideways

So, as I write this, I'm rarely making any mistakes and crossing them out; as I speak to a friend I'm able to string together coherent sentences.

There is no difference, only that constructed in the wilderness of semitotics to the way we may think when we arrive at a scene. I consider myself the same as a newspaper copy editor, able to spot the buried lead.

Speed at the expense of accuracy is one thing; speed; the artists' temperament is quite something else. See you on Viewmagazine.tv

Eat
Posted by Dr David Dunkley Gyimah at 7:39 am