videojournalism - writing the next training chapter 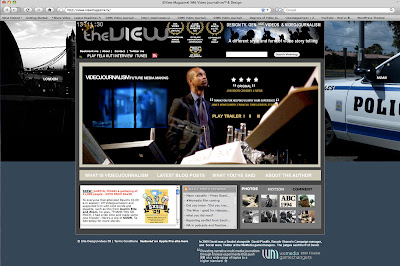 IMVideojournalism - a 3rd way to visual data representation,
in so far as the film is not enough on viewmagazine.tv

What hasn't been written about videojournalism today in blogs and tweets that needs writing about?

Sorry. Im being glib. To suggest we know everything there is about this visual creative process. Not so. Art evolves and continues to do so and videojournalism is an art as much as a science. It would be a brave person that said videojournalism, this is it folks.

That said there's sufficient data and info online to launch endless regiments of videojournalists: "Ten ways to do this and the three rules of framing". Much of this is good brain food.


The future of journalism? Made a couple of years back, soon to be reduxed from Viewmagazine.tv's david dunkley gyimah on Vimeo.

Then there's being in the ring sparring with a tutor. Being told the earth really is round and then finding empirical data to support this through countless experiments is my joy of the journey.

Fascinatingly, videojournalism is maturing, beginning to splinter into many genres. We can duff our caps to those that have worked the genre, unravelled or designed its core and continue to do so. Rosenblum, Tom Kennedy, Travis Fox, Peter Ralph are are but a few name drops in this now vast ocean.

But as the net, now today less dominated by the English language, or in English is being enveloped by territories such as India, China and native Spanish, French, German, Italian and Arabic speaking countries, we'll begin to learn more of the auters whose culture impacts their visual sensibilities and thus have quietly been carving their niche and style. 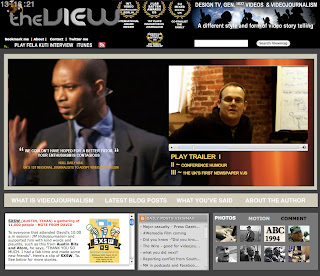 We're entering an exciting tipping point, when soon, just soon, we'll see videojournalism become somethings it's presently not; pull itself away from being "the illegitimate off-spring" of news. Divorce itself as the derivative of point-shoot, to a semiotic of re framing of factual info.

And by framing I don't mean that literally in the sense of mis en scene, but how visual narratology in the hands of creative technicians can create strong intoxicating emotional codes.

In years gone by at the BBC - bimedia- working, radio and TV, had huge detractors. Now we're being birthed into a heter-homogeneous media: many media have now become one.

Training Days - the Videojournalism Way.
Videojournalism presentation at the world association of Newspaper and some conference humour on viewmagazine.tv 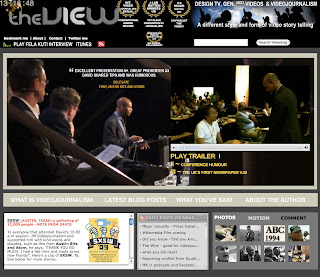 The medium I first fell in love with listening to the crackles of short wave radio in a dormitory almost literally under the equator; my first film: Bed knobs and Broomsticks, the novels of Enid Blyton all conspire into these new gene pool - the science of storytelling

Recently a well known US publisher has endorsed the idea of a book, in which I would want to pull together ideas of videojournalism and its pre resonance whilst working within broadcasting as well as punt some of its more imaginative acquisitions.

In 1997 two of Africa's oldest broadcast networks undertook their first state-to-state broadcast using videojournalism to construct not just 3 minute packages of news info but a series of 6 X40 minute programmes in 7 days.

It's one of the most memorable and proudest things I have ever done. But the landscape now demands more. For by pushing at the margins we can build a new mainstream to rework the BBC's Lord Reith, construct, deconstruct and share.

This new economy is rightfully so getting busy.
Posted by Dr David Dunkley Gyimah at 12:07 pm