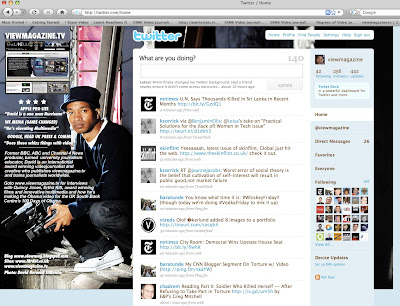 So there you have it. Twitermania - this year's blog fandom.

A colleague showed me an article. Blogging is dead. It's soo passe'. So fickle is our ferreting for the new, that blogs are losing a bit of their sheen.

It's not unexpected, though blogging isn't and will not quite crash and fizzle. But our penchant for the sound-bite 5 sec clip news; the average length was 20 sec at one point is being mirrored in the new matrix of digital media.

And yes presumably at some point, which I tongue and cheek posted about a while back, the Tweets 140 characters will be under threat.

Twit backgrounds
So after some attempts at uploading the background, an exercise in bite-size branding it's up.

In the event I trawled the web looking at the number of outfits providing design templates. It's huge. In the absence of Photoshop et al, a worthwhile pursuit indeed.

I wanted something that flagged up Viewmagazine.tv and played to the wonderful shoot by David Berman, but was also mindful of being to excessive.

The result I think looks more like a DVD cover with pulled comments from a number of key figures.

Is it worth it? Well you can never tell, but personal branding certainly has moved on since I wrestled with the idea of even having a site.

The rest is the ambient awareness posts that presumably draw in an audience. Supposedly the jury's still out on whether feeding the cat constitutes a level of excitement to draw massive followings.

But clearly there's a celebrity quotient at play; celebrity by your friend's standard and those than don't know you.

Paris Hilton could seemingly sneeze and that'd attract 500 more. Reason, people just wanna know. For me, perhaps you, no such luck.

Then there's the volume. Imagine living your life through tweets ala Truman. That is every half hour a tweet. That's some doing. If you're like me I go in spurts. My life aint that interesting!

And then how much do you follow? This new simulacrum culture of open sms is still sorting itself out.

But ambient awareness is a strange phenom. Hey, I sense a cat rescue coming along.

David tweets at twitter.com/viewmagazine and is producing a video for Classical Composer Shirley Thompson new score for Obama 100 Days, and truthfully it's turning into a min-drama. I need more pics
Posted by Dr David Dunkley Gyimah at 10:03 pm