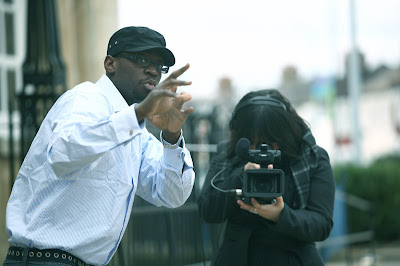 Don in full directorial flare shot some footage from the RTS Awards, which will be used as a package soon.

It's a behind-the-scene film before the announcements of the nominees and winners, and Don gets to show us the au natural look.

I'll post a bit of the footage this week.

Don started out as a TV and Film Undergrad before going off to Goldsmith to earn a Masters in Broadcast Journalism.

I met him at Westminster and we've stayed in touch and done quite a few shoots together. I don't know whether it's mentoring, but it's been good to see how far he's come in confidence and TV making skills.

His doccie from Nigeria is the stuff of nightmares. He dropped by my house with hours to go before boarding the plane and I gave him chapter and verse about what he may face and then the rest was one calamity after another.

The doc was fine, ( it was a grade just short of a First) but the assaults and intimidation he suffered; his driver was beaten, one of his cameras stolen, leaves you feeling lucky to be able to go about your filming business in London.

A couple of the shoots I really admired him for were:
Don writing now:

There is no better time to be a video journalist than at present, with cheap equipments and an abundance of stories to tell ... especially when working for and with David one of the 1st video journalist around. The RTS was one of those shoots you attend and you get reminded of how much more ethnic minorities are absent in our media sphere.

And this very much ties in with the current debate taking place next week. You'll kick yourself if you don't turn up.
Posted by Dr David Dunkley Gyimah at 9:38 pm