-------------------
A couple of days ago this (below) was posted on the Press Gazette's website. It concerned a major newspaper group for ethnic minorities folding and then finding a buyer. I'm speaking at the above NUJ gathering next week so felt this post apt and timely. Here's the thread. See what you think?

New Nation saved from closure after buyer is found

New Nation and two other Afro-Caribbean titles have been saved after a buyer was found by administrators.

Last month, the Ethnic Media Group – which ran New Nation, Eastern Eye, and other ethnic titles – went into administration. ......(more - the link is further down).

It led me to post a response, which was replied to by Haile Dube Yaas who said

David, the fact is the mega-websites of The Guardian and Telegraph are loss-makers but are subsidied because they believe that is the future. The black media do not have the resources of these giants and need to break even today, not tomorrow. .......

I then replied to Haile.

The absence of any press which has had a relationship with readers, let alone ethnic, in communities establishing and developing their identities is likely to have consequences. This shouldn't happen I say, so what's the strategy? 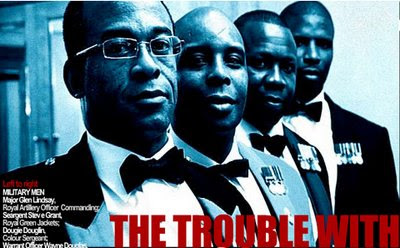 Why you need (ethnic) media. In some cases it acts as a counter balance to the perceived status quo. When BBC 3 ran a populist but highly controversial programme: The Trouble with Blackmen, it caused an outrage within the press. I set about remaking my own version interviewing people like Doreen Lawrence. More here

Please do take a look and see what you think. Here's the whole thread on the Press Gazette, but before you link of there, this below provides further chill winds.

From the US from New Media America: No Tears for the Chronicle. and from the editor:

Editor’s Note: The San Francisco Chronicle is teetering on the brink of collapse, if it cannot find a buyer or further slash its staff and operating costs. Bought by the Hearst Corp. in 2000, the newspaper lost more than $50 million last year and its readership has steadily declined. NAM editors asked ethnic media journalists and media observers what life would be like without the city’s major daily.

What is the solution because there are some damn fine writers here, the US and elsewhere finding it hard. Not because of them. But because the dynamic has changed.

No one would have said the Monks of Valencia circa 1600s were not superb as they handcrafted the scriptures, but Gutenberg's press changed the dynamics.

BTW if you're from the NABJ or similar it'd be great to hear from you. I have attended NABJ gatherings on and off since 1994- the Big Unity in Atlanta.

Who would have thought back then of this crisis. A crisis indeed for all, but acute for smaller business and ethnic press.
Posted by Dr David Dunkley Gyimah at 3:04 pm