WOW - Women of the world festival -what's your contribution? 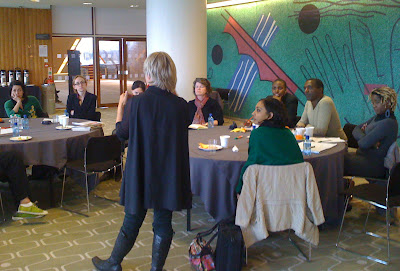 Jude Kelly OBE, Artistic Director of the Southbank Centre chairs
Women of the Word (WOW) ideas session.
The conversation then turned to films and Kathryn Bigelow's Oscar and its impact for women in film, outside of Tinsle town

No doubt that question has been asked in academic papers, film magazines and industry committee meetings ad nausea.

However, in Central London, The Southbank Centre level 5 room, films about women or by women has a resonating pathos of its own.

Sholay (a film with men, made by men, so it won't count) or Seetha and Geetha, another personal favorite of mine and Screen writer Foye Banjo may attract a matured audience, but how do you get 16-18 year old noted Choreographer Sita?

Sandwich the works of new women film makers amongst traditional works was one solution, evoking the programming of cinema Newsreel producers of the 50s.

And to rally interest from potential attendees at grass and arboreal roots level, the selling powers of the door-to-door Avon ladies is an idea well worth considering said Jude Kelly chairing these talks.

Film, was just one of many themes in discussion at this ideas session. 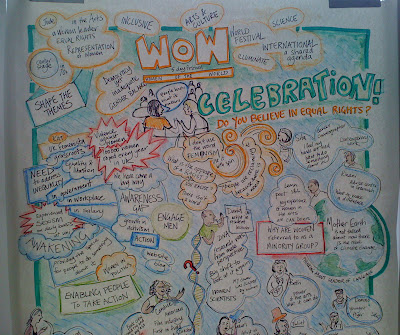 The meetings was captured with a unique artistic
method called Visual Minutes
Women of the World
The over-arching occasion was to posit ideas for a festival, Women of the World, acronymically presented as WOW. This, session six of seven, yielded a festivals of ideas as broad and eclectic as previous ones said Jude, Artistic Director of The Southbank Centre.

They included Candice, a pioneering black woman - one of the first Assistant Directors in the US' film industry; and the youngest woman in the UK to gain a pilot's license. She won't forgive me if I name her.

Meanwhile, fellow Artist in Residence and dancer/choreographer Gauri Sharma Tripathi spoke of her daughter's long pony tail - a matter that draws attention in her birthplace in India and manifests as a protest between femininity and male religious dogma.

Poet Lemn Sissay pointed to an observation how the term Mother Earth, Gaia has become redundant since the mascularisation of green issues into climate change.

The word "Mother", which evokes deference to many, curiously in the theatre can be used to diffuse a character's identity. All the cast will have names, bar one said Jude.

Jo Glanville, Editor of Index on Censorship, looked at representation and gender-standing.

The previous evening she'd welcomed into the country Iranian singer, Mahsa Vahdat - a quite magnificent singer said Jo, but did we know that because of her sex she cannot sing solo on stage in Iran. The authorities forbid it. Her performances here will no doubt attract attention from the law makers back home.

She spoke of sexuality and notions of beauty in Lebanon from a show of camped up transsexuals, and presented an intriguing story of Belsen.

When a consignment of lipstick and sanitary towels found its way to the concentration camp, the oppressors would not know what to make of a mass spectacle of women, haggard, despairing of their plight but momentarily emboldened by the power of a beauty stick.

They dressed their lips, and placed sanitary towels Dallasesque on their shoulders - poise and femininity - in the face of excruciating circumstances.

A frame work? Those who have found it problematic could be invited to a showing: see and tell, as opposed to those who may have heard and told. 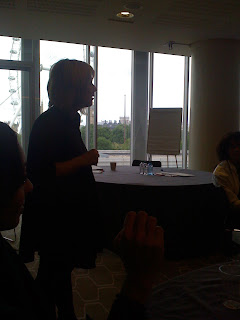 Planning stage for WOW
The vision is a grand one, to celebrate, visit, critique, experience, append the contribution of women.

My own interest is quite simple. My work has been catalysed by women. My mother's support kept me strong when I was placed in boarding school in Ghana - a round robin trip of some 3000 miles which mum would undertake as much as possible for eight years.

And a recognition by figures I presume who might have observed a quickening for me to do something creative, when the same sex was indifferent.

There is also the small matter of being conscious of a parallel struggle - a supervening movement. In the 80s just as women in the media were forcing the agenda for change, ethnicity and diversity also found a voice, a co-joined struggle at times, though the ethnic discourse would falter in comparison.

And finally the doctrine. Take this video from a friend, now a TED fellow explaining how the the male domination of cell biology (DNA) has failed to give oxygen to an alternative view; that the cytoplasm ( female) holds equally the key to life.

Women in the World is scheduled for next year. I'll keep you posted.