When you pick up the camera - as a videojournalist consider who's watching! 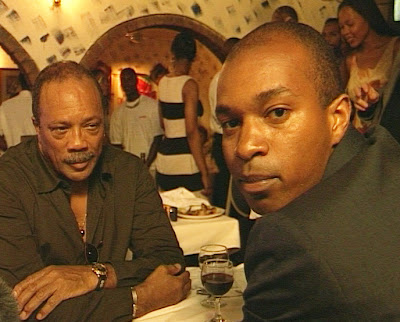 This is a matter of record, interviewing the great Quincy Jones, but who's watching?

It would a gross underestimation to say media news is at a diffused crossroad.

The networks continue to lose figures, with hard data from the likes of Business Insider and one study after another tells us something we already know. No news organsation has as yet cracked any discernible strategy.

The crux for the super News is beyond upgrades in the graphics, newsroom set, and personality-driven news presenters and reporters to stem the flow

For the teleported vision of news and its concurring costs, the dilemma is one mimicked in related genres such as docs, which has eased from science and legal frameworks of authenticity to their own branded reality: The observational doc to the reality show.

When you pick up the camera, those explicit choices, though hidden bring on hard choices.

Largely, the institutions with deep pockets e.g. the BBC will seek to maintain integrity through the news camera being a tool of science and uncontested truths. This requires training and investment to find that subtle form of performance.

Get it marginally wrong and the news becomes at worst boring, if no drama ensues. When there is seemingly no story what do you do? I had the privilege couple of days ago talking to a BBC senior figure.

The Videojournalism News Today
Present day audiences will just about sneak scheduled news, but unless the footage is dramatic, in which case it would have been accessed elsewhere, they'll eschew their appointment with the news.

The videojournalist, and I'm speaking from its manifest of 1994 ( Channel One TV) was sought to work the margins, not so much the primary what - which the big news outfits would cover - , but the how something occurred.

Here, aesthetic has more leeway, with the result the VJ can craft miniature films. And here is where the long and short tail audiences online have shown their appreciation.

There's no schedule, guarantee of appointment, but if its enjoyable non fiction, which works on the premise of most dramatic arc stories, of some form of populist resolution, the viewer and videojournalist both win.

There is no panacea for the fragmented loss of audiences, other than a wholesale shift to a semiotic which meets the zeitgeist requirement of your dominant audience - which for the moment may be baby boomers.

This differs for each territory and a bespoke approach is required as I have found working in Egypt (where Television is still strong); China, where investigative journalism is big business; and the UK, where purely on population figures, diversity and increased choice they'll test their braodcasters.

And the generations of 1990s who are unaware of the politics and in some cases the value of news proof versus news aesthetic, will look to sate their appetite elsewhere for news ( The Star Trek effect) . Historically young groups have always been difficult to capture.

So when you pick up your camera consider your bipolar standing.

In my case an interview with Quincy Jones as a record may amount to very little. What you may want to see is innovation within its content, by which it means I'm forced to weigh up aesthetics and creativity of content against scientific truth to win over the audience.