BBC My story - great idea & stories, but the film making? 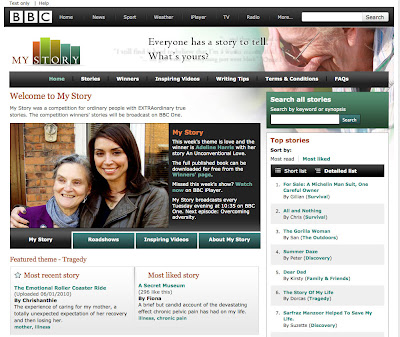 The BBC's My Story - amazing stories, but the semiotic even from the above picture suggest we still can't hear what you have to say, without a celebrity. User Social Network debunked.

I have just watched the BBC's My Story and curiously am upset.

The idea is well thought out in a way of bridging television - a social enabler - that is it brings people together, with the new new thing, participatory social networks.

In the latter case, this was illustrated by its central premise that everyone has a story to tell, so send yours in, which people did in their droves, 100os in fact.

From that judges of the highest calibre of literature and reportage e.g. Fergal Keane, whose reports from Rwanda and South Africa still resonate today, combed through and chose an eventual winner whose prize was nothing short of miraculous.

Following today's showing the winner will have her story published tomorrow. That's ambition. You can, as te BBC says, download that story for free, which I have just done for an Uncoventional Love by Adeline Harris.

Adeline's story is as amazing as the other three profiled in the show.

She fell in love with a clergyman, Father Kelly, many decades ago. Couched in the words of the show's presenter the relationship did not go to the next level. But he cared for Adeline through trials and tribulations.

They lived together for two years. Then she fell pregnant to another man and had a baby and still he cared for her. Up until Adeline married her lover and they had another child when Father Kelly would shun her. He has since passed away and Adeline is still married to the same man many years on.

This is an epic story, no less emotional wringing than the other two on display: a woman who falls in love with a lifer and campaigns for his release, having questioned the original conviction. They are now living happily on the outside.

And a woman whom through the power of the Internet, most likely Facebook returns the affection of her first love 40ish years ago and despite being happily married leaves everything to reacquaint herself with him, and leaves her happily married husband beached.

Middle England must have been harrumphing like mad at the moral message of this story as somehow through the presentational skills of the host Christine Brinkley we get an unequivocal great love story, rather than someone who's also been, well ghastly.

What her husband she'd been leaving with in her retirement must have felt? But this was about stories, so yes, the clash of morals itself is fibre for the viewer.

The show's flaw
So why was I, and I imagine I'm in a minority, mildly irritated? Because the films they showed did not do the stories the justice they duly deserved.

TV has its failing in its often tired aesthetic, exacerbated media historian critics might point to the time 35mm gave way to 16mm and then beta cameras took over.

So what you got was the most cinematic quests reduced to the style of a TV news package. The narrative, their story is strong, the visualisation however is enough to mutter all sorts of things.

For instance more often than not, a camera is used to record the subject's narrative in one take, and then sequenced shots cut back and forth, with V/O from the presenter. There are enough cliched shots e.g. looking on yonder, to fill the Directors Book of Film Cliches.

The colours are harsh and any subtlety of lighting to reflect these incredible stories had been sacrificed for capturing the oral narrative -the news narrative.

Reading the download, the book is everything I suspected. It's cinematic, expansive, rich in description, textured - just as a book should be. But if the producers treated the book, just as they had the visual story, there's no reason why you wouldn't expect a newspaper article.

And perhaps a good one, as there is nothing intrinsically wrong with that, if that's what was intended, but I suspect it wasn't. This was a different semiotic.

You could argue on the pin of a needle whether the show needed a presenter, but there's something about epic stories that don't need the embellishment of a strong personality narrator.

TV goes social network is inevitable, as realised through the litany of reality shows, but TV realising sometimes cinema offers a richer experience is something still being wrestled with - and that's a shame.

Ultimately just as the book is a download, their self-contained stories should be as well potentially cinema at its best.

For inspirtion, if you haven't seen Last Minutes with Oden, up for a Vimeo Awards , now's your chance. TV could still learn a bit or two.

Last Minutes with ODEN from phos pictures on Vimeo.