The ultimate programme maker - videojournalist.. but..

Speaking at Apple stores , where I'm going back in a couple months time

Recent news addition. On Thursday 14th October I visited the HQ of Google in the UK and had a personal presentation from Peter Barron, head of PR for Europe on the future of news. I'll be posting that soon and it has a marked impact on the post below

My conversation with a senior executive at ITN, the UK's biggest commercial news outfit went like this:

Me: So the guy seated over there is a videojournalist?
Exec: "Oh no (with mild look of horror) he's much more than that.

The title of this post seems a trite on the side of hyperbole, but as an academic, there's something of the law of diminishing returns here and what might amount to an erosion of the role of videojournalism, at least to its UK pioneers. 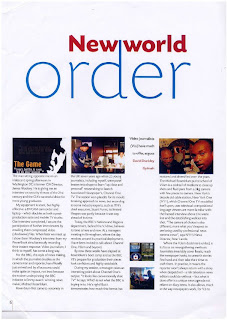 I have been writing and practising videojournalism since 1994, at a time when the name was obscure, but revelatory enough to prompt the query.

For the school of Videojournalism 1994 hired by Associated Newspapers, Videojournalism was the ubiquitous, versatile media practice. Not the fact that they did everything within the news concept, that breakthrough had limited gasp appeal. it was the ability to traverse different programming genre: news, series, docs, motion graphics, drama.

News was just one strand, its own fixed semiotic and then to the other scale - a six part series as slick as any BBC series made by a sizeable team.

Article on a New world order on Videojournalism for Sony Mag, written in 2000


What the experts say
Suart Purvis, ITN's former Chief Executive says it all. He was at the RTS, the US equivalent of the EMMY's, as the stalwarts of Channel One were showing what they could do. His head, Michael Plantin then looked over to Stuart and asked why ITV wasn't doing this (referring to the programmes) and how they were being made.

This point is worth emphasising: videojournalism, at least increasingly to some of the pioneers was a way to make anything. The cable station allowed them so, their training gave them that experience. This is something Michael Rosenblum knows all too well.

Fast forward to 2010 and the videojournalist ( the law of diminishing returns) has become a defined form. You work in News? As a newspaper it defines you, but something's about to explode - albeit over the coming years. 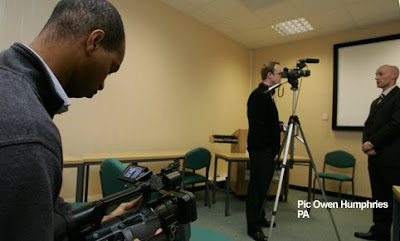 Filming you, filming me. The Making of 8 Days with the UK's  first regional newspapers to adopt videojournalism in 2005, who I trained.
It's not videojournalism's fault. The title came before the art form could stamp and crystallise its identity. If I call you an artist, you could work in any genre of the arts. If I call you a videojournalist, you're more than likely working in the field of news.

That's what the ITN exec had identified, that's what I have been writing about for 15 years. Thus far we haven't found the title that illustrates that grand polymath versatility. No correction! it's been found, but the form has sped along. 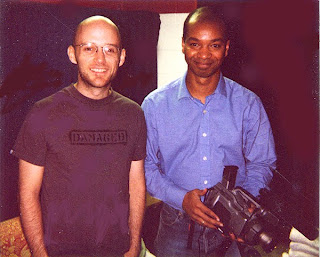 Shooting Moby in DC. Circa 1989. I'm using the VX1000  one of the first DVcams, which didn't quite meet TV transmission standards.
Remarkably and perhaps surprisingly, this is what faced some of the pioneers of television with labels that did not cater for them, so they lifted all the definitions from Hollywood: producer, director and so on.

Over the years, I have occupied several positions within television, new (back then) media and digital media - from creative director of an ad agency run by a former head of TV at Saatchi and Saatchi, to long formats, to conceptualising with teams whole sale programmes and related media.

I could be called any number of titles, but the legacy of Channel One and what that meant remains like an old shoe.

We can't say we shouldn't get hung up on titles, because it's what often defines you, but the sad short history of videojournalism is its misappropriation - at least to a Channel One crew of the 90s.

I may from now on call myself producer, creative director, designer, director, editor, but then what's wrong with videojournalist?

As Purvis said to me... You're a story teller!
Posted by Dr David Dunkley Gyimah at 12:40 am