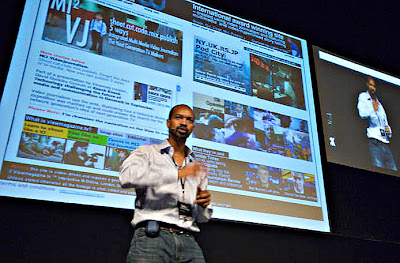 Presenting in Norway at Innovations Lab
Back in 1991 is when it happened.

In an industry where blogs, social participatory networks, new journalism, had at least another 15 years to fully gestate, as a minority in many ways working in the media, I often thought about "if".

What if the sort of programmes, BBC TV's flagship news programme, where I would gain my break could be replicated elsewhere and for anyone. How empowering and enabling that would be.

Newsnight was replete with bright sparks (it still is) - Oxbridge grads. The producers have this talent, an ability to take an idea, and communicate it analytically to their 900,000 audience - largely decision makers.

The ideas arise from critically assessing an issue, a thought, and producing theatre that captures the imagination and provokes a response.

In a previous post I spoke about participatory social media videoprogrammes. Newsnight's programmes invariably fulfill one facet of this, though yes I can see areas to do more.

I mention this programme and indeed other analytical programmes I would work on such as Channel 4 News and The Politics Show, because I would think then, as much as I think now of the power of unification: the best of TV, design and digital media.

If we can converge combined crafts, pass on such analytical skills, if we can hotwire this to the best of today's digital communications, there's a strong proposition.

This is not merely about superfiical reportage, that involves "observe and report" on an unfolding an event - which can often drive the narrative. It's deeper, its value system creates knowledge that many access to provide individual solutions. It interrogates business models, lifestyles, motives.

Mumsnet's political and economical footprint is key, given its constituents. But think about an analytical end product that not just explored the trip, but strategically underpinned the scope and challenges for Oxfam, Mumsnet and various related agencies. 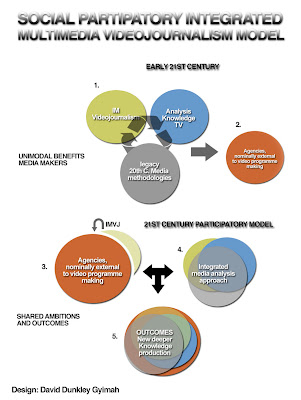 Journalism Educator and blogger Jeff Jarvis asked in his highly acclaimed book "What would Google do?", to inform a different strategic approach to the new media industry. I say what would an IM Videojournalist (with an analytical crafts background) do? 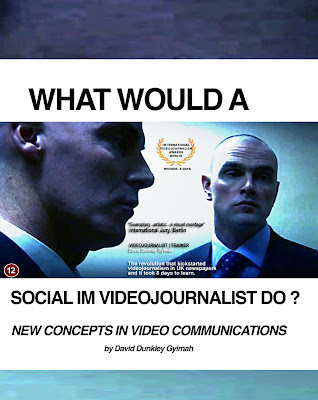 This front cover, above, is a chapter for a book which features an image from "8 Days", which was the recipient of an international award in Berlin. The film was claimed by three agencies after wards because of its outcomes: The Police, The UK Press Association, and International VJ Awards for its representation of a different form of videojournalism.

This notion also has a strong outcome also for a increased transparency for multinationals as a strategy for accountability from reading this expansive piece on Crisis and PR disasters in the Evening Standard. More on that in latter post.


Looking to the future. 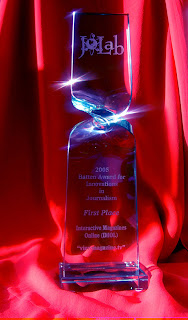 When I was awarded a US Knight Batten Award for Innovations in Journalism, the judges commented:

"“This interactive magazine foreshadows the future with its use of hip new story forms and highly video-centric Web tools.”Batten Advisory Board Judges

At the ceremony I had to point out that the work was largely mine; I was too embarrassed to own up to creating it single handedly, but today the future of the past is now the present.

And now that we've passed video making's acceptability, the next phase is a more rigorous, emboldened analytical aesthetic and principles, which I tend to discuss in Viewmag- the Outernet (this blog).

In fact Viewmagazine's real treatise was to combine creative designer and videojournalist. Create the video and build the branded sites. You can see quite a few on Viewmagazine.tv


Video news journalism which doubles as a corporate video
A video I made more recently interviewing the Director of Chatham House (formerly The Royal Institute of International Affairs) by default appeared to meet those requirements.

The Director is seen robustly explaining a topical issues of international affairs within the framework of integrated multimedia videojournalism. So the video has as much interest for the organisation, which led to a meeting with its communications team, as it did for me showing what can be done.

Consulting at the FT, working with one of their talented producers Rob, one of the proposition we worked on was to produce the definitive Budget programme. We accomplished a very credible package on the day at a first attempt after 2 weeks IMVJ training.

And next month I return to Cairo and Nile TV to work with a new generation of journalists, who are tech savvy and also embracing this evolving epistemology for video communications. 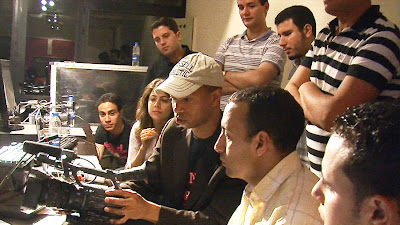 David training a new generation of journalists from Cairo, Nile TV - national broadcaster
Why am I talking about all this now. Because last week I interviewed the editor of the UK's most successful commercial news company, ITN and in the course of the interview she spoke about, and I acknowledged, that the digital revolution had not yet stolen all their clothes.

That whilst everyone's doing video, not nearly as many are doing analytical video as a critically- led aesthetic and the irony is in a climate of uncertainties, we need more information to challenge a raft of issues.

If you remember the Thatcher era and confluence of domestic and international issues, when commentators spoke about the erosion of values, and that Thatcher would say there is no such thing as society, programme makers had something to challenge.

Rough political climates, make for good foundations for incisive programmes ( video making). If in the yester years we prevaricated or even protested, today the options are a more potent one.

Invitations to speak and share
That's that then I thought which is why I intend to turn my attention or return to this in a very practical craft either as a series of workshops or conferences talks, starting with an invitation to return to Apple Stores in London.

There as elsewhere I'll talk engage and reveal some of the specific work flow methodologies which can be used to strengthen beyond unitary videojournalism.

So this is also an invitation. If you'd like to know more, I'd be delighted to hear from you, otherwise click on Apple Profile or my website viewmagazine.tv . My email is david@viewmagazine.tv. I can't tell you how much I look forward to that. 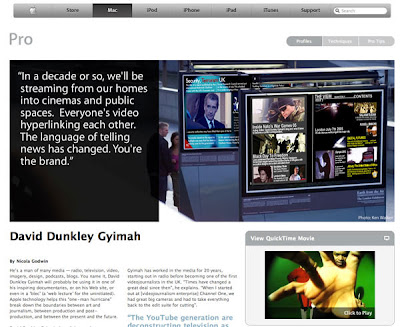