Videojournalism - a rightful move to cinematography 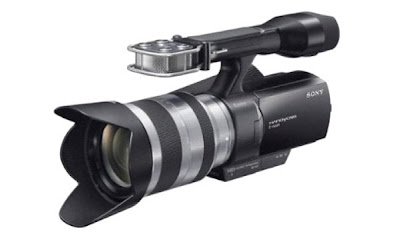 It was bound to happen.

At the point when the Canon EOS-1D Mark IV threatened the market of one of the world's most powerful electronics companies, and the film of Vincent Laforet ignited the video-blogsphere, engineers would been spending TDBs ( till day breaks) on their Macs.

Sony, by John Nathan, one of the best business books around (which I have just finished) shows the clear ethos of Sony - minaturize.

So Canon's audacious move to film on a stills camera body would have turned Sony co-founder Masaru Ibuku, noted for his great gift for .."forseeing product applications for new technologies and inspiring engineers to over reach themselves..", well, in his grave.

So here comes the Sony's VG10 Interchangeable Lens, the first prosumer camera with this facility- although with a limited bespoke range of lenses at the moment. But that will change.

What does this mean for you and me? In the 80s/90s I went with the Hi-8, VX1000 and a slew of others before the A1: small compact, inconspicuous and if your worked hard on your zoom, you'd achieve acceptable shallow depths of field (dof).

Then I needed more speed-of-turnover, so I opted for a JVC with flash cards, and bolted on a lens mount which can be clumsy at times, so the ergonomics of shooting with a quick release lens will be ideal. 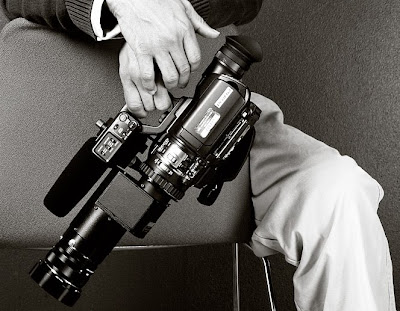 JVC with a long lens mount and 50mm prime lens

This is what the JVC gives me - a shallow dof, through the F stops. This is project with John Hegley - a well known Poet in the UK

Fundamentals of videojournalism
But there is something more fundamental. We're about to re-enter an era, for which, unless you worked in Newsreels with an Arriflex, or tend not to go down history's rabbit hole, I'm about to lose you, so please stay with me.

In the 30s onwards the Arriflex, Bell and Howell and a few other cameras had turret lens structures, ( you can see a number here) that were the equivalent of the lens sciences of 28mm - 120mm. Trouble was metering (gauging best light) and finding focus became a problem for news ( always on the move) so it was eventually dropped, particularly for 16mm cams, before ENGs took over

Today more expensive cameras still have the ability to change lenses, because if you're going to pay £20,000 for the Red's ( described as the Ferrari of Cameras) body, then it's a given you're a pro and thus know something about cinematography. And if you're in the film business, why am I having this conversation with you? The prosumer cameras until now, have seen that as a luxury. The interview below is with a Sony UK official on video from 2006 who says they have no interest in setting interchangeable lenses to prosumer cameras. Frankly, economically it's not worth their while. Canon and the expanding competitive market changed that.

Report featuring Sony talking about cameras in 2006
But now there's a predicament which needs resolving and one that creatively places DV film making and videojournalism in a new league. Understanding or re-engaging with cinematography: see the work of the Ford's (The Searchers, 1956) , Kurosawa (Rashomon 1950), Ozu (Tokyo Story 1953) and Kar-wai's (2046, 2004) - a present favourite below.

Cinematography is not necessarily about slickness, but about how the lens and light create the scene's internal narrative. The external becomes the titles, narratology, synch etc. When it works well, you can't imagine the scene to look otherwise.

Take Michael Corleone in Godfather discussing the plot to kill his brother Fredo. The scene uses natural light, it's back lit and nothing on paper says this should work, but it lends perfectly to murderous skullduggery. That's one aspect.

Another, in fictional film terms is where you can direct an actor to a mark and focus pull - no problem. For the videojournalists, knowing what lens to use, pulling focus, and how different lenses affect a scene, will now soon become crucial. Understanding also the subjectivity it lends to the scene is equally important as this conflicts with the notion of news and its neutrality.

Same shot -different application in post - yields a different connection to the photo. Which one do you like and why? Be mindful that this involves an editorial decision, which lens and filters can replicate during the shoot.

So where are we?

Well firstly, that the notion of news, as it is, will most likely adapt to accommodate these aesthetics and structural changes. The IMVJ model within my Phd research alludes to that. Next week I'm meeting a senior executive at ITN and will share a deeper argument on this
Ssecondly if you're learning videojournalism without any sense of cinematography - ask for your money back.

Senior lecturer and former international broadcaster David Dunkley Gyimah is in Cairo, working with its state broadcaster returning to launch a new kind of show with videojournalists and films next month. You can find out more from his video site Viewmagazine.tv.

Yesterday's and most recent posts were: 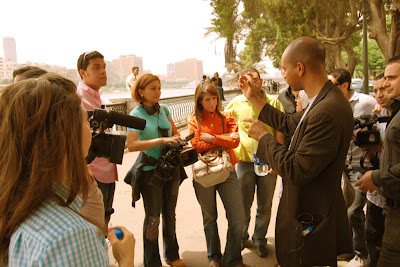 David in Cairo with some of its broadcasters, in news, features and parliamentary correspondents May, 2010

Posted by Dr David Dunkley Gyimah at 9:54 am