The science of new journalism from multi, trans, and cis 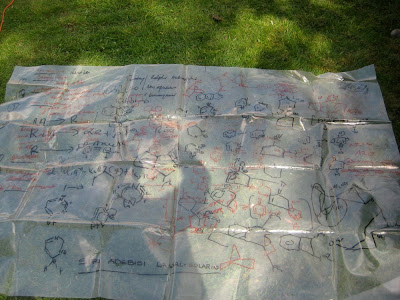 Science sheet - found in my old suitcase - diagrams to solve organic chemistry puzzles
I graduated in Applied Chemistry, and truthfully by the second year constantly wondered what I was doing. It was too theoretical, too abstract. What job would I pursue when I finish ? Because the idea of standing in a lab checking samples filled me with dread.

Organic Chemistry, a heavy component of the degree, though was CSI Miami in waiting. We'd test samples on compounds we'd made running them through a GCMS and then Infra red gauge - each filled in a piece of the puzzle for the compound you wanted to name.

Aha, there's a peak at 1700, that's an OH molecule. It's the same as a doctor reading their chart.

The science of journalism
Science, reads the world, with an eye to explain everything. Hence Hawkin's recent super nova claim that the universe can now, heretically, be explained without God.

In the past, science solved the mystery that the world was round, or through Galileo that things fell down, worked on later by Newton, before passing through to Einstein who posited the theory of relativity.

Journalism has had its fair share of scientific involvement and enquiry. The camera was an object for scientific recording to prove a point e.g. Eadweard Muybridge's galloping horse.

The interview is both a legal concept of truth abeted by science's non disputable notion of truth.

The report, film, you're making is wrapped with science. It's responsible for the algorithms in FCP. The colours you see that animate the sense boils down to the occular science. I could go on.

Last year, I interviewed one of the most venerated figures in this evolving media, Henry Jenkins.

Jenkins coined the word "Trans" in describing an aspect of media. Effectively meaning literally in latin, "the other side". Trans was being used to elaborate on an unfolding trend of different media, supporting one another, though distinct in their own right.

Yesterday, I had a back to basics moment. My Applied Chemistry matter, yielded an interesting question.

Trans Debate
Trans emerges in science from Organic Chemistry with compounds that share the same chemicals but are mirror images of themselves, isomers. When the distinguishing compounds say H20 and Cl are on opposite planes they're referred to as Trans.

When they're on the same plane, they're called Cis.

The conversation then comes back to journalism or media. If Trans Media is about different objects fitting together likes some transformer, what's Cis?

The references is that it's the same. The article you're writing that I attempt to replicate in video - that's cis, but what are the defining qualities.

It matters because science has, and can be used to provide us with answers to questions that lurk, that have not yet become the zeitgeist.

Transmedia has and it makes sense for the media practitioner of the future attempted five different ways to catch your attention. but within each of those five ways there's a Cis that allows us to extrapolate, mine deeper for questions.

It may be that it's the cis that holds the report to account. Haiti, Pakistan, China - places that have suffered crisis in earthquakes and floods, but once they disappear from the TV screen, we the viewer deem them as "not relevant anymore".

Cis becomes the continuum, the sequel and prequel to contextualise within that media, what we didn't know, but adds to our knowledge.

Cis is the manner in which through video hyperlinking we can knit relevant media and reports of others to share.

It's a thought, and I more than think we'll come by it more aggressively, if not in name, but in practice.

I'm at Apple stores London talking in say, November. By then I should have something to show, but please do weigh in with your thoughts.
Posted by Dr David Dunkley Gyimah at 8:48 am