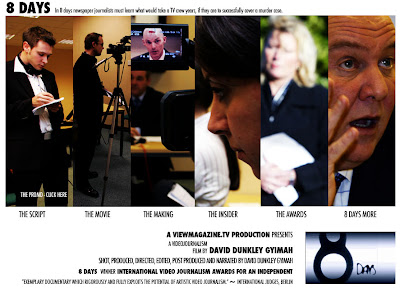 Apart from the video, it's about understanding how to produce the film/ multimedia video driven site
An ex-student didn't get it. For her documentaries and pitching were the norm. And so they were and still are if that's the genre that you call your own.

The new story teller online, must reconcile themselves, against their knowledge in storytelling and technical ware to craft the most telling story for the appropriate medium.

In 10 years time we won't be having this conversation because it will be so evident.

In 2010, you're a factualist, a faction story telling, a something but not journalist because even that word has outstayed its welcome.

Operator: J-O-U-R-N-A-L-I-S-T which publication do you write or report for?
Speaker: er, I don't, it's all online
Operator: then sir you're not a journalist

No worries, Defoe (noted as the first factual journalist ie he did not make things up) will not be spinning from the world beyond.

Storytelling apropo
Comprehending how to tell that story in micro, macro, trans, cis, visual, text, factual, fact-fictional (drama-docs) will be the stuff you do by 10 years of age.

In the meantime, we are still getting used to the concept. So each year I supervise a group of Masters students to tell stories, in which most will do so online.

But, and this is the big "but", they are not building websites - though they probably will- they are telling stories that lead to construction.

There's a difference. The BBC's eminent web site has a host of stories, but how do you take one story and make it work? Film trailer websites do this in a limited capacity, but it works enough to get bums on seats.

I'm a bit of a Weinstein when it comes to these.

In October, after we marked the students work, I'll upload for you to see.
Posted by Dr David Dunkley Gyimah at 5:25 pm