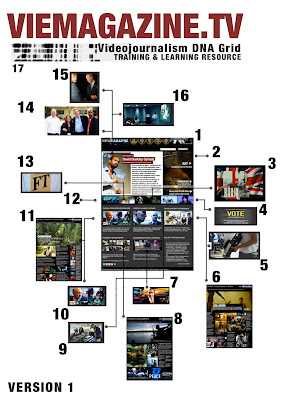 1. Main site of viewmagazine.tv I build using CSS, dreamweaver and Flash. I have been using these since 1999. Source code is hugely important for bot penetration and google ranking. I restrict a number of bots raiding my site via robots.txt. The site is designed for ipod aesthetic, though I'll have to expand it to include HTML5.

2. EAT - Promos, motion graphics etc a form of visual music cut is one of the many iterations of videojournalism. Understanding how to communicate a narrative with pictures and sound. In CSI Miami, music breaks of this nature are regularly deployed.

3. BBC at its best. In the 90s the BBC pioneered a series of shows that revolutionised BBC programme making. Not only is this still present today, but many of its staff have become big names in the industry. The programme Reportage, was highly stylised and editorial.

Its nearest comparison is Current.tv. Reportage had a unique way of programme making and 'pulling sot" that created real watchability. This piece is about Britain's young brain drain, that I'm reporting on.

4. Filmminute: an outstanding one minute global film festival. They wanted an online show, so in less than a week shot over three continents and working with their exec producer Sabaa Qua, I put together this show. This is something that as a videojournalist I believe you should be able to do: conceive a programme and shoot it. At Channel One, the UK's first and only VJ station, all the programmes were made with the Videojournalism concept

5 Technological camera determinism. They say its all in the gear, that's just part of the story. The camera I'm using goes back to principles of early film and the use of say the Arri Flex and fixed lenses. Zoom lens were introduced into cameras to give the film maker more freedom, but it also took away a huge aesthetic and craft in lens technology.

That needs revisiting. There's a reason we still find the movies attractive; the cameras they use being one of many. I'm using a converter and a couple of prime lens with a JVC

6 The Artist and Talks: Viewmagazine contains a number of videos where I have been fortunate to give talks, these are samples at Apple Stores UK, SXSW, World Association of Newspapers and at the National Press Club in Washington.

How do you film yourself and get multiple angles. I can often time events in my talk that allow me to focus on particular subjects. In the last year having become an artists in residence at the Southbank, the boundaries of Art and Journalism are becoming fascinatingly more defused.


7. Reputation Management. A growing feature of the web particularly faced with the many talented individuals, who are themselves brand. I shared a stage with CNN's Christine Amanpour and told her "the Amanpour brand" through television already had a presence which could easily be transferred to the web.

But what about you? You're good at what you do, but beyond your immediate circle who knows? In my broadcasting days I produced Jon Snow, so when I left he provided me with this video recommendation. It's branding by proxy, and I believe has little to do with self aggrandisement, but serves the same function as Linked.

One of my grads worked for Sir David Frost. Frost I'm told liked him. By the time he told me, my advice came too late. He'd missed an opportunity to be endorsed by him. Recommendations may nto get you the job but make others feel comfortable about your credibility.
Included in my batch are Blogger and Professor Jeff Jarvis and Media Storms Brian Storm


8. Promo and Assignments: I once had a call to ask if I could produce an ad for a US-based client destined for CNN International in 12 hours with no brief, no funds etc. I named my price and set about recruiting a team: voice over artists, graphics artist and a studio to work through the night. This is where videojournalism training circa 1994 was a boon.

My training took three months, but it was also built on a foundation of news and current affairs with the likes of BBC Reportage and Newsnight. Today I'm still learning. Please don't be fooled into thinking after a week that's it. That intense training you get - even over a year - should be the spark to continue to innovate. The commercial got to CNN spot on time and aired many times through out the day.

In this section I'll also highlight promos made for World Press Photographer Yannis Kontos and my time hired by the undisputed world heavyweight champion of the world Lennox Lewis to film and create a series of promos for him in his fight with Tyson in Memphis.

9. The first causality of war is truth, but many of us still push to towards realism in war. Embedded Videojournalism is one aspect. In this section I show video and talk about Nato and other EU defence executives desire to understand journalism by running global military training between them and inviting a select group of journalists to report a war you've probably never seen or heard of.

In one of the pioneering programmes I acted as editor to a team of 25 journalists from around the world. The news we made was created and on the spot satellited to Military executives in England observing flaws and making their own recommendations

10. Videojournalism and hard news, and the interview first popularised by Anstey's Housing problem (1935). But how do we create interviews as films. Errol Morris has accomplished this superbly as in Fog of War, but for the VJ.

Here I'm interviewing former head of the CIA James Woolsey after meeting him at one of the think tanks I belong to Chatham House. The interview took place in Washington and explored the why and what it took for graduates to join the clandestine service. It uses a range of film techniques to move the narrative.

11. Global Cinematic Reportage. Some of the packages listed here include: Reuters in house discussion on the mobile phone, a reconstructive face-building operation in Ghana and the Ferrari 599 GTI.

Once again I'm attempting to illustrate various narratives that should be open for the videojournalist. Intimacy is a given, speed of turnover is something I indulge in and teach others. It's not about preconceived thoughts, but how you shape your narrative to resemble your timeline with the information presented to you.

12. Cairo's Nile Television is an outfit that's taken the plunge in understanding a new language for videojournalism. Just to set out my stall; there's videojournalism the technology of person and camera, and then there's videojournalism a semiotical attempt to explore new film aesthetics: reverses, flutter cuts, shift aesthetics, motion (4m) when you engineer all the facets of the film to be moving: camera, subject, music and cinematic dialogue.

This will be my third time going back to Cairo and this time will involve creating a film show with the videojournalists becoming the stars. It's not the first time it's been done if you recall Julia Ceaser on Paint it Red, but its being contemporised.

Of course time sensitive info helps, but they've used the brand to leverage businesses who are just as excited seeing themselves on screen as they would in the paper. My view were clear and the video we created pointed to that, for the big stories such as the Budget, we should be tuning into the FT.

14- 16. One of several trips in a year, but this was special in Miami for I met up with individuals whose work I admired from afar: Brian Storm of Media Storm and Tome Kennedy the brains behind the Washington Posts online video and many awards until recently.

I interviewed Brian at length, whine you can see on viewmagaazine.tv Also in this section presenting at Apple, where I'm due to go back and speak in Novemberish and one of those rare moments of meeting royalty and being described to them as a multimedia videojournalist.

To tell you the truth I can't remember what HRH Prince Charles said.

17. This site is about the gene of viewmagazine's videojournalism and the picture you see here is my actual genetic code. For reasons I won't go into detail here, I was, with my family the first to have DNA genetic finger mapping in the UK for a civil case. Yep that's my DNA rearing itself as me in my work.

This is the first version of this digital map. The next iteration should be more comprehensive with greater links. See you soon.

David's been a videojournalist for 17 years and a broadcaster for 23. He's a senior lecturer and undertakes several projects a year around media productions. He is midway through a longitudinal study on future media.
Posted by Dr David Dunkley Gyimah at 2:49 pm