The Reunion - incl VJs 15 years on 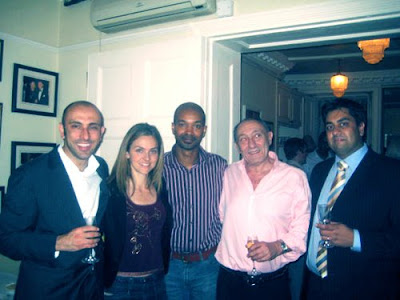 Lee, Rachel, David, Julian, Ravi - some of the ex channel Oners with their then MD

I'm not one for pose-photos, but yesterday WAS a very special occasion.

Very special for Julian Aston ( second from right) in the pic.

After years in the media industry working with one of the UK's media heavyweights Lord/ Viscount Rothermere, and launching the likes of Teletext, The Performance Channel, Channel One TV, Julian is off to other non-media things.

Julian, a highly successful producer/ director in his own right was class mates at the London School of Economics with none other than the Rolling Stone's Mick Jagger and recounted how they use to mock Mick who'd tell his classmates:" **** Economics I'm off to listen to Bo Diddly ".

It was a great evening rounded off with a reunion of some of the originals from Channel One many with the own tales to tell and a debt of gratitude to Julian.

Ah yes, Channel One was the UK's first and so far only 24 hour cable news network staffed only with VJs as news and programme makers. It cost 50 million pounds over its four year cycle from 1994-98. With Michael Rosenblum et al knocking the VJs into shape.

Julian told an interesting story about a major UK publisher who'd just launched their news outfit making fundamental mistakes that he first identified at Channel One.

And I have to add I have come across many myself

Remember when Channel One launched there was no blue print for how you develop a 24 hour news station with video journalists.

But what we learned both in terms of TV, cutting edge film making and the structure and experience of setting up a VJ station has been invaluable.

Rachel Ellison MBE, a successful motivational coach, with a strong track record in broadcasting and working in Afghanistan,

And then far right Ravi Vagdama - whom at the time was one of the youngest VJs at Channel One and is now in charge of the news hour 6-7 at GMTV.

Out of the pic on a night edit, so could only stay a while, Dimitri Doganis, who is one of the UK's most successful producer/directors and was behind the critical Siege of Bethlehem

The award winning and critically acclaimed current affairs film aired around the world was the 38 day siege of one of the most scared of Christian sites - the Church of the Nativity - by a group of Palestinians, many heavily armed, and some 30 priests.

They were surrounded by the Israeli army.

Yesterday for the first time Dimitri explained how he got that world exclusive and it is an amazing story, not least also because he was working the VJ route and at times shooting with a VX 1000.

I'm hoping to talk more about this with Dimitri on camera. Really don't miss this, there are so many twists and turns, it's a film on its own.
Posted by Dr David Dunkley Gyimah at 8:55 am