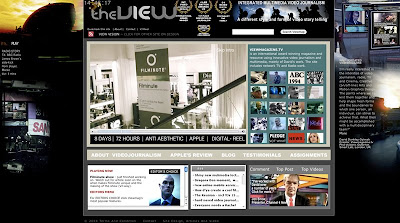 I'll be on this theme for a while, though it may well migrate to a new template blog.

On the front page of viewmagazine.tv, I have attached segments of the shoot with Filminute.
A detailed "how to" will follow at some point but a few markers to throw down.

I'm using video journalism as the template, as opposed to a crew, so have opted to shoot 'dirty' ( no clean line of sight) and tagging. It has its own energy.

I remember reading a good while back how some of Hollywood's top camera operators had to really "let go" to get that immediacy look, so loved by many directors.

You're almost discarding everything film school has told you. Bummer!

There's some blocking on one of the earlier shots from Canada created by the shoot team.

Diagetic music and Non-diagetic is so important in creating a mood for a show.

You'll often hear me asking what's the "emotional involvement", and "editorial proposition" for where the show's going.

Diagetic music refers to actuality in the film. Close your eyes and see [:)] if you can pick out every strand of sound in your surroundings, because you can often use this to craft a story. It's all in the ambience.

Diagetic is about the musical tension and I often, where possible, eschew using 4/4s. In the making of I'll post some of the music that we worked to get right.

Saba, exec producer of filminute, is a natural at presenting. The key- keep it natural, but project your voice a tad more than you would.

Filminute should be coming to a small screen near you. In the meantime go vote for your favourite film online here
Posted by Dr David Dunkley Gyimah at 2:47 pm