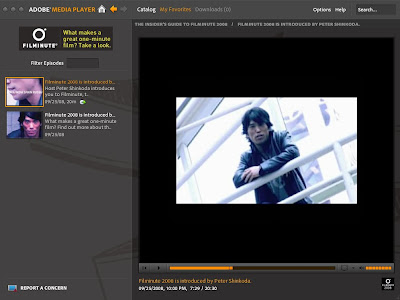 Going from Online to TV - that's the dream of Filminute.com and they're inching closer to it

Almost every media company, newspapers now, hold out the hope that their videos will make compelling watching and break viewing records.

But the holy grail, at least now, is still getting access to the TV screens.

Current.TV sorted that out as part of their growth strategy.

Online is still the long tail

Where once upon a time, broadband was the outback, strategically within a number of broadcast corporations, it's become the ground for the added extras.

Some time ago I spoke wrote for journalism.co.uk that "Broadband's capacity offers scintillating innovation, it would be a shame to waste it"

"Television Networks and publishers eager to enter and go beyond Web 2.0 are using it as a repository for repeats. At best meeting the need from 'cash rich, time poor' audience. At worst just plugging a nuisance gap: 'what do we do with this all this capacity?"

Today, the loose theory is using broadband to conjure up new shows that can be used to work a potential audience. It's still about eye balls and now those blog comments can be used to craft the show: television by committee or is that the wisdom of crowds.

In time I believe the newspaper industry will be marshaled by their own visual agencies; a suped up Press Association gearing their products for cable, Net TV and various other outlets to amortise their videos.

There is money there, someone's just got to be build the agency and find the buyers.

Online to onTV
Filminute demonstrate how with compelling content, the move looks more than feasible.

Last week I worked with its one of their executive editors to design a look and feel around their existing content: 25 one minute films, which have courted publicity from Wired and Variety and played at a purpose-built cinema in Selfridges - unheard of. 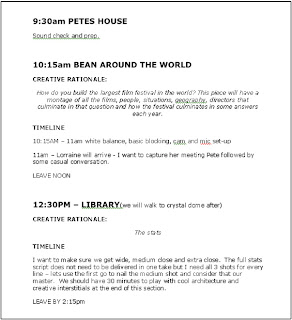 For the first show, the links came from the sharp looking Presenter Peter Shinkoda from Vancouver and Exec producers Sabaa Quao in London and John Ketchum in Bucharest.

The above link to the show is Not the final broadcast version which was attempting to resolve technical film issues between cameras shooting NTSC and PAL.

A small team of fantastic producers from notes discussed with Sabaa pulled together their shoot - all in a day and the tapes were sent over.

I shot three segments with Sabaa in London within Selfridges - half a day including the outline of the show. And then a day of editing.

The hold up - day or so - came from sourcing appropriate music.

But the result is, you can see on Adobe's Player platform - something that you could imagine on television, with behind the scene extras on each film maker in the competition.

With the amount of video and specialists within newspapers etc, this surely has to be part of THEIR strategy, at least in a manner of making money from their assets.

I'll post a longer how to including some of the problems involved with NTSC and PAL shooting on viewmagazine.tv,