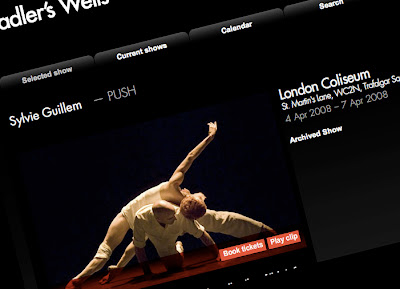 Was invited by a dear and awesome friend to the last showing of PUSH at the London Coliseum.

Simply awesome. Shirley Thompson, whom I have featured on viewmagazine, and is a fellow lecturer, wrote one of the scores which has very rich South African township overtones.

So not surprising, she's been invited to the influential Grahams Town festival in South Africa.

Shirley's other claim to fame is being one of very few women to write and conduct for the Royal Philharmonic with her score, New Nation Rising.

I began building her site here but got side tracked so I'm going to have an overhaul think, and bring in some talent to rebuild her presence. Jack, answer your emails. LOL

Yesterday's post about auterism had Peter ( cheers mate) from Shootingbynumbers draw my attention to a great piece in the New Yorker about the parallels between Directors such as Godard and Truffaut and the Videojournalism movement.

It got me thinking about something I bang on about in advance vj talks: the fluidity and choreography of the camera in the way it pans and swivels from one subject to another. - a sort of steadycam visual language

The Shield is one of the more recent advocates of this style, though going handheld sans steadycam gives that more rugged "inframe" look.

Granted in shoots where you can't control the event, you've Little control over where and when to place the camera, but as I'm alluding to it's like a dance and you have to trust or build up your instincts.

Of course it won't always work, but like any dancer some moves are modified and others jetissoned in production.

In Brian de Palmer's Snake Eyes, there's the opening sequence which last a fair few minutes without an edit. Likewise in Bonfire of the Vanities, where the director hides behind a bellboy character on a trolley. It's about 5 mins long or something.

Obviously in a film that's more than possible as you can place your characters and time them in, no such luck in a doc/feature.

Or is that really the case?

The New Yorker piece opens us up to the auters of cinema's old fashioned but often overlooked method for learning the craft. Watch loads of films.

Everything you can get your hands on. It's worked well also for Tarantino and Robert Rodriguez.

Incidentally there's a great online tutorial from Rodriguez about how to shoot to edit, meaning you shoot so close to the final edit that little work needs doing afterwards.


That again is one of the VJ mantras- or at least in my book.

So back to the dance, awesome, free flowing, fluid, expansive - everything the best of art can be.

And you know what video (VJ) as a form is not very different.
Posted by Dr David Dunkley Gyimah at 7:03 am

Hmmm...there's more than a little similarity between your and Mr Rodriguez' advice on shoot to edit and getting the most from one take using zooms etc....
Come to think of it, I've never seen you both in the same room either...!!

hehe. degrees of seperation. Nothing is sacred in this game. Perhaps what is illuminating is how you apply one discipline earmarked for one profession to the next.
Like I was saying Dance and Camera.
It's not so maddening really, the father of cybernetics Norbert Weiner got his theory for robotics from neuroscience and observing brain damaged patients.
At least film and video are blood relatives.