Wish hard enough AND You make your own luck 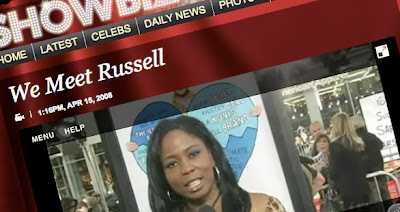 I'm thrilled for her. I posted about a former student and friend Dionne Clarke when she got her dream job.

The story is simple. Dionne was and is ambitious. She wanted to work for a big hitter. She did all the commitment and leg work and would occasionally drop me a line.

We chatted and I'd share my experiences and offer what I could; the set backs, the highs the lows. When you're starting out as a journalist it can be tough.. real tough.

I suggested she do a report for viewmagazine.tv and she did. The more recent was DreamGirls. OMG it was freezin, but it shows how determined Dionne was, and then there was Sin City.

Both times she was on the red carpet jostling with the networks. The videos went on view with her credit - what else. And she was in the midst of branding - new pics and web site which she could have dumped the vid on.

It's easier to make your case to an employer if you have something, not just anything, but the very thing they trade in and it has quality written on it.

The cut of Dionne doing DreamGirls is really loose so you're seeing the reporter at work chasing her interviews and being relentless. Dionne has that quality and she was able to demonstrate it.

Frankly she could have done it on a Myspace, Bebo, Brightcove or whatever, but it worked out fine and now Dionne can be seen here burning he red carpet in LA for Sky Entertainment and here doing what she always wanted to do.

Could you raise a glass to her evolving success and mull the thought that: yes you can. Dionne now joins the ranks of the pass it on. Humble, gregarious and self assured. Some one, somewhere will get lucky when she gets comfortable to start mentoring and offering a thought here or there at breaking into the industry.
Posted by Dr David Dunkley Gyimah at 2:05 pm

I just want to say congratulations to Dionne and wish her the best luck in her job!