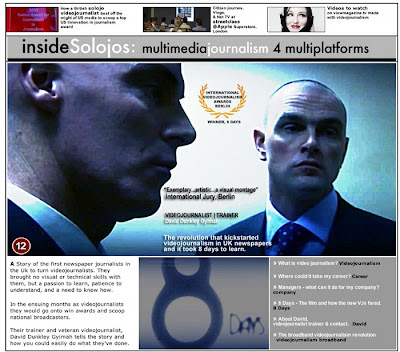 It's the VJ film that captured the mood and ambitions of UK regional journalists taking the plunge into videojournalism in 2005.

The film "8 Days was a record of how 8 newspaper journalists after 8 days training would have to tackle their biggest assignment: a true brutal murder case, re-enacted by Cleveland Murder Squad.

For me as their trainer, it was also one of those rare moments, a chance to document who the journalists were and how they would fare The feature sat around for months before it was submitted to the International videojournalism awards in Berlin and three months later, a week before the awards ceremony, I was rang up on a Sunday to say I had won.

Back to the Present
A basic write up was placed into one of my oldest domains from 1999. Mrdot.co.uk.

And over the years it's been quietly sitting around as I have concentrated on viewmagazine.tv

Today, I opened the site to give it a face lift and over the days will place more relevant information about the group back then and how some are doing now.

Mrdot.co.uk was for me the site that would capture the solojo videojournalism paradigm, explaining what it was back then and how managers could use it. And it gave away one of the biggest secrets to learning Videojournalism used on journalists in The UK, US, and Africa ( Ghana and South Africa) .

Robb Montgomery CEO at the hugely successful site Visual Editors.com and Digital Editor and the brilliant videojournalist Gareth Bartlett at Cornwall and Devon are just two of many who've become fans.

They say, what's never been done awaits to be done and you know if you've been there that it can be the scariest, loneliest place. There are no footsteps you can walk in, no handrail to guide you, just you and your instinct and ambitions.

And this is how it all started one winters evening: 8 Days- the redux on Mrdot.co.uk
Posted by Dr David Dunkley Gyimah at 3:12 pm