Just how do you make research sexy?

In Homeland (2011), the US TV series CIA character Carrie Mathison marvels at her colleague's handy work piecing together the trail of their nemesis.  It is some feat connecting the dots.

The reality, though, is far from the same adrenalin rush. However, the exhilaration of a find is enough for you sprint stark-nakedly down the streets.

This has been my torment for the last few years, now needing to be tied up and put before the board.

But before then, the arduous, mind-numbing trawl through wads and wads of data. It's a process that respects no short cuts. Akin to detective work, you stake out, cock your head to one side, read through, and then stand back, hoping the 'truth' will jump out at you.

Often, ever so often clarity grabs you, the wall morphs like a Potterish map, rearranging the data to provide a theme, but it can be fleeting. If you think to hard without taking notes you're lose it.

The wall dubbed RE-SEARCH is where a Q and A of 15 interviewees, international award winning film makers, drapes. Red markings scorch the text where themes emerge.

But those themes only become apparent once I have confidently embraced the question I need answered. It sounds simple enough, but there are 24 questions with answers - each worthy. But  I know I must discard almost all of them to get to the riches, to get to the treasure, the real treasure I want.

To the right of the main block is my tick list. There is where the 100 or so original interviews I have conducted remind me of my progress, or otherwise. They range from the greatest film makers of our time,  Robert Drew, and David Maylse - stars of the 1950s - to a  stream of BBC high ranking executives. 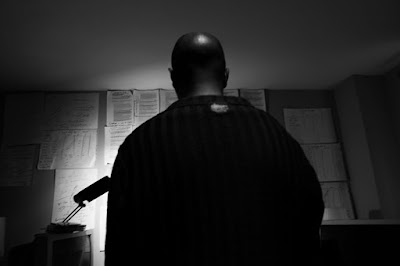 Easy? Not really because rhetoric requires a suitable logic must be placed before you, supported by a  litany of experts, sometimes seemingly doing the equivalent of a gymnast's double layout flyaway, except with words.


"If nothing else, The Blair Witch Project should remind us that our own idea of whether a film is or is not a documentary is highly susceptible to suggestion."

Wallis and Pramaggiore in Film a critical introduction speak about the role of cinematography in films, and its contribution to the emotional state of the viewer.

A doc can embrace cinematography to the point it is cinema. That much Drew infers too.

The lines between these forms are not just becoming diffused, but re-engineered into new forms with words such as "remediation" and "transcoding".

Why does this all matter? Not least because I need to complete the journey I started, but that principally, it is knowledge. It helps you see though the fog of confusion and that is sexy.