The future of the present web, video, multimedia lay in the past

On the cusp of Facebook's flotation....

It's been billed as a device that will change our media habits: a media app which captures life and gives the illusion of a new reality from which people will flock in their numbers  to participate.

Fancy that, with this app, from just a picture you could give the illusion of movement.

Various names have been devised; the z-trope, k-scope, p-scope and the v-scope and it'll make someone a lot of money.  Of course these are all acronyms, because this wonderment of our age took place more than a 100 years ago.

And despite their genius - all of them were killed off for something that did change the world the cinematographe.

You would have struggled then as you will now to say what the future is as artifacts of innovation often can often provide a stimulus, but the hope of a lasting presence can be elusive.

In 2001 working in London's media-agency hub, Soho just before the first dotcom boom, we developed with Director and Flash a documentary about boxing life that used game theory and no fixed navigation.  It was a time of new convergence.

The Family was runners-up in the UK-wide innovation competition by Channel 4, Unleash the Talent and earned us a monocle from Channel 4's head at the podium stating: "You guys are doing something that would take Bill Gates with a team of people of people to do".

Yet you've probably never heard it. Heavy weight boxing champion Lennox Lewis eventually did and his epoch fight with Tyson invited me to join the team, where we built similar creative bits

Videojournalism on the web

In 2005 after three months of css/html/design encoding and gathering some of the most innovative video friends I could get my hands on from the US, South Africa and the UK I published a website.

It incorporated what I called cine-videojournalism and multimedia and led to an invitation to speak at the National Press Club in Washington and subsequently a Batten Award. 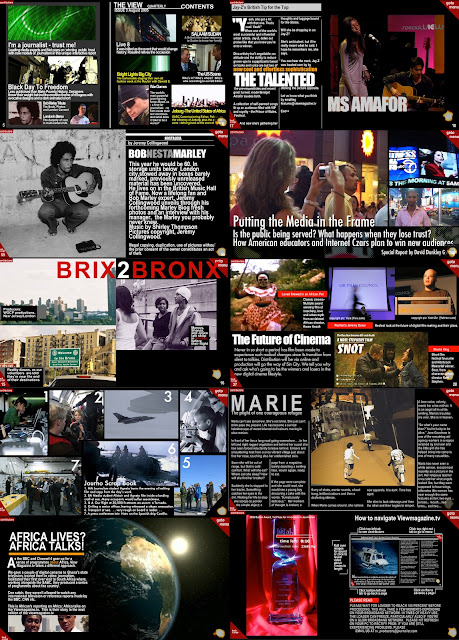 The judges below said the following: 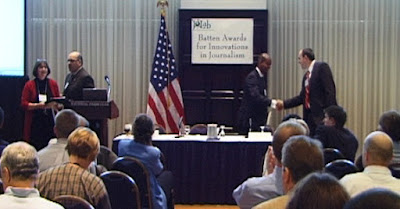 It's more than likely you've never heard of viewmagazine.tv either, though yes video today is commonplace, but that was bound to happen.

At large, media society's method for forecasting the future particularly online, which has eroded the concept of elite media, involves citing individuals or teams outside traditional agencies.

And heaven knows we could quote a few thousand.

Mapping out individuals/teams whose pursuit of innovation develops into a theme is one of the keys to be win universality. Remember metacafe, before Youtube; Yahoo before Google!

Don't laugh but I once remember being paraded alongside other talent in ES Magazine because someone thought I was about to do something. I was young and impressionable, and it was just another article, you soon learn :)

Understanding innovation out there calls on reverse engineer . Why twitter? Why Facebook? Why this one. That's often easier than punting what may happen, but often the signs are there, but they tend to be complexically wrapped up in the political, cultural and social.

One of the UK's most foremost experts in media Professor Brian Winston charts these phenomenon into a story that goes like this: the technology needs a kick from other factors to surface; otherwise every tech-bit would be successful.

It may be poetic license but in the Facebook movie, Zuckerber's epiphany that men want to see other girls and people want to connect with others cxists in the leavened books of  Shakespeare, and before him too.

The remarkable late Leonard Shlain and McLuhan are just two of a line of experts who see the artist at work, sometimes quite literally.

So somewhere in the suggested break up of the EU and the the fears, anxieties, and pattern shifts being generated is a new big idea waiting to happen. Its solution will be personal, but catch the zeitgeist of  the masses. Individuals coalescing around an idea and by default doing your global marketing.

Some pundits want to predict the future, and they do so successfully once again on the collision of sociological-tech-political factors

To predict the future as I said on Apple's profile site is a mug's game, but given gilder's law, I said everyone will become a publisher and you will become the brand.

Now that's nothing revolutionary except when it was said on Apple's site in 2006 it was easiest the nearest thing to hyperbolic claptrap.

Yet, arguably the experience of work, connected with bedded theories can be a strong indicator of what might likely happen.

McLuhan, the great media theorist loathed the idea of predicting the future.

"No", he said, "There are a lot of people busy predicting the future. I'll leave them to it, the futurologists and certain sociologists. That's their job, to look at the future.

Historians take care of the past. I'll tackle the really tough one: the present. Let me see if I can predict the present"

And where does that present come from? Your past, your ethnicity, gender, education, cultural values etc.

To talk of web based documentaries and video online then is not for me an illusion of our time, but harks back to a past, firstly to growing up in Ghana - where there were no definable precepts in media.


To working on the BBC's Reportage, which was an extraordinary programme for its time with figres such as  Tyler Brûlé and Radio 4's Hardeep Singh Koli. Reportage in 1992 was forging a video narrative based around current affairs and MTV, and would influence a generation of BBC output - still does.

There have been other milestones
Next month I'm looking forward to visiting a number of countries to share knowledge; not as a series of events from the past, which are now just apparitions  not be not to be glorified, nor set on pedestals.

One of them is the concept  called the Outernet - a method of production with themed systems within web, video and education and collapsing them all together.

Posted by Dr David Dunkley Gyimah at 1:50 am