Is how we teach future TV/Videojournalism flawed - look to the future of libraries!

."..It has been proved beyond question even before the war that it tired the viewer, if over a long period, he has to keep reorienting himself as the producer cuts back and forwards from camera to camera."

The quote comes from 1948 as the BBC set about devising a new programme idea called: "News"

Many, many years on and if the author of this memo were to drop in on his once new creation, he would not find fault.

In my research some of the most respected figures in the industry though can see the seams of News' structure coming apart.

Yet in the absence of a clear solution, which history shows is never a clean break and must often must come from within those structures, the law of entropy prevails.

When a young photojournalist stumbled across TV crews creating a story by what he called 'staging', it's news because someone not native to the form is seeing this for the first time.

It doesn't make it right, but at one point in our history, doctors attempted to cure illnesses by letting blood. You could in your infinite wisdom then have spoken out then but you'd be seen as sententious.


Reworking new ideas
I'm exhausted; but I'm finding the reserves to sum up a couple of years research.

TV News will remains untouched; I have worked in it long enough and possess a healthy appreciation for what it does within its coded system.

My research looks beyond news and some interesting things are emerging. But first the process of discovery...

A PhD is an interesting, sometimes painful pursuit.

It's not interested in commercial knowledge and how one might prove a previous commercial system wrong; neither does it reward personal gain. A PhD looks for what they call an original contribution to knowledge.

And this is not a sweeping, broad canvas statement; a thesis is about burrowing deep, not across, and uses rhetoric and citations to build its case.

I have interviewed more than a hundred experts, read more than a thousand book/ text and watched countless films; sometimes its like looking for a needle in a haystack. One page in a 500 leaf text reveals a crucial link, ad then you're off again.

I've come to the realisation emphatically, rather than whimsically, that if the research holds, then the way we story tell needs overhauling.  Now you could argue, well that's obvious.

But how do you know?

You'll say because .... and I'll ask how do you know. And that process continues to the point where you arrive at the source.

This was Kant, the great philosopher's contribution. Knowledge must be defined apriori - meaning without experience alone, through empirical research.

So in proving a point we arrive at the giants of industry, those who developed ideas, before the structures existed.

Why for instance in the 1960s was a law introduced by an independent body stating news should be free of involvement of its shareholders. For ITN's boss at the time at least it would get the executives of his back telling him what he could and could not do.

Fast forwarding to the present and does this framework still hold?

And it's not just that. But if we believe we need to do more, a digital renaissance to address present issues, just as an aging institution in Seattle has become the model for new learning, then we need new ways of learning. 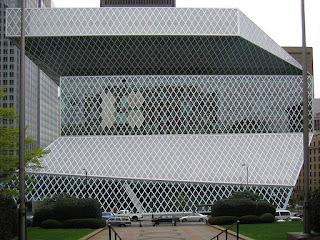 The libraries  in Seattle and Netheralnds, Dok, include meeting places games zones and  digital learning zones called the media lab, mimicking Apple. Attendance had risen to 80 percent. Innovation has sparked a new appreciation.

It may be that we may the approach developed by the Khan Academy is the approach, where independents requiring change use the Net to test their theories. If that's the case I have got some site building to do.