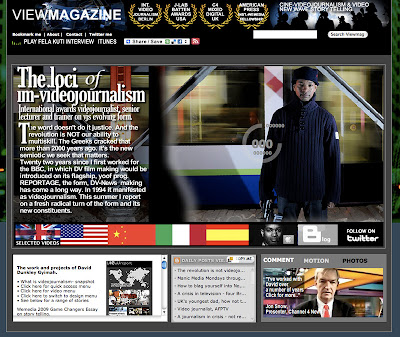 More often than not I'm talking about video and visual journalism, but invariably the film is not enough - at least online.

I have been lecturing in aspects of online design from 96. Truth, I've come to enjoy the project creative process, stemming from my last job as creative director with a Soho ad company re-active, more so than the nuts and bolts of sitting down designing.

That said I found time today to overhaul the front page of viewmagazine and will set about soon css-updating some of the pages.

Some of the marketing mantras we came to live by in Soho included:


Journalism sites, compared to corporate ones, thanks to a slew of social networking utilities, and a new web 2.0 design openness have truly come a long way and the televisual experience is an increasing feature.

Features such as mogulus enable us to stream live news, though aside from the likes of the G20, live lecture, weburnalists are finding original live content streaming an interesting challenge.
Bit a deference to the News editor now eh at the traditional station.

The New York Times' Reader 2.o has something of the zeitgeist about it.

But one facet which is becoming a key issue is languages. Consider this: stats passed to me from a marketing friend.

Ten years ago, the web was said to be read by 70% English speakers. Today that figure has inverted with non-English speaking being more dominant.

So one of the strategies is to devise a landing page, in my case in Mandarin, Italian, and Spanish for the associated media.

I was expecting to be in Beijing this summer but couldn't commit the 6 weeks required for the gig. It seems like it's going to be a busy summer nonetheless, so expect a few more languages to crop up.
Posted by Dr David Dunkley Gyimah at 1:26 am