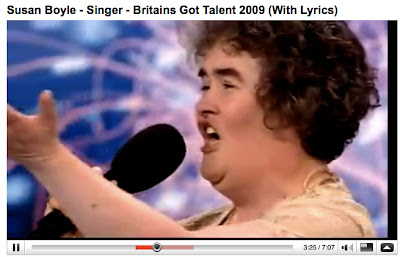 Soon after it's release it was The Matrix, then Big Brother followed, and soon academia using various phenomenological studies and psychoanalysis will no doubt turn its attention to Susan Boyle and the Susan Boyle moment.

Just why did her video take off in the manner that it did ? 48 million views! Closer to 150 million views now at the time of writing.

This article doesn't probe an underlying philosophy, though it would be a fascinating exercise in story structure, arcing, empathy in music and indeed manipulating the viewing audience.

Instead I took to writing this after spotting a post from Mindy McAdams, a highly respected Prof in media at the University of Florida (US) and behind a successful blog.

Mindy posted this on her site: "One of the hardest things to teach is how to tell a story. I could say “how to tell a story well,” but no, it’s simpler than that. Students just don’t get how to evaluate the pieces, how to hone and polish them, and how to arrange them in a satisfying way. So I’m always on the lookout for great examples of storytelling" .

Her post was prompted by : A (Nearly) Frame-by-Frame Analysis of the Susan Boyle Video by Gary Stein on Click Z: News and expert advice for digital marketers .

Interesting I thought so I left this response on Mindy's site. (this is a slightly different version and correction of grammar doh!)

Susan Boyle moment: this is TV at its best by committee from a reputable production company, a completely different beast from solo video story telling. I counted close to 100 personnel, 30 at least of whom would be involve in direct production. Here's the list for the US Version. There can be many permutations depending on the show's turnaround, whether it's all live etc.

Firstly, the show's magic revolves around a team of personnel from that small community of live Ents shows and camera crew /technicians, which will vary depending on whether it's ITV/Freemantle (commercial) or (public sector) BBC. The costs for one show can be quite something.

This mammoth feat, the end show starts from researcher/producers at the auditions looking for subjects with entertainment value.

It can be quite thankless sometimes. There's a lot of hit and miss, but Boyle would have attracted most producers' interest. And after she would have *sang (woops mistake, doh! left on Mindy's site. Use of past participle here) sung for them privately, it would have been a no brainer.


Then the producers set about looking for all those things that make a story sell. It can be quite ruthless here as Boyle would probably have not volunteered most of the info we now know about her. There's been some debate about this shoehorning on radio stations here like LBC.

The VT (video) segment producer would probably have his/her own team including, a music librarian, who'd conjure up those ditty tunes and feel good songs and then there's a very experienced editor brilliant at cross cutting.

The stuff that happens on stage is the skill of a live gallery/studio director (Jonathan Bullen) with at least 6 cameras, one or two on jibs, which s/he is calling up on screen. What we see on our teles is what s/he is calling live or "as live".

Technique and Gut Feeling
You could break it down and analyse it, but it's the director's gut feeling call for when and what camera comes up. You've seen them at work, it's an incredibly specialised and highly stressful job. You know: "cam 1 zoom- cu on girl-stick with her"; 3 pull back; 4 get ready for a swoop; 1 cue Ant and Dec.

Ant & Dec now saying you didn't expect that. But the team in on the act knew it and had A&D prompted.

Before the live performance, a producer would have "run VT" - ie. played in Boyle's background bit. Look hard and you can see the break on the Youtube VT.

The floor manager will have had the VT countdown cued and be counting in Simon and hushing the audience.

And then after the show the prod would take the ROT (recording of transmission) and recut that for a new package. All this with a committee: Exec, series prod, etc throwing in their comments/critique in. From the offline to online for any segment can sometimes involve several cuts. You simply have to love this way of working otherwise...

At least that's how I remember it working on the various Ents/News shows on BBC TV I worked on.

If your class are interested in this then I'd recommend a live TV multi-camera training course and visits to studios. BTW if you're in the UK etc I'd rec University of Westminster.

This is something TV has always argued it does supremely well, particularly ENTS TV. Susan Boyle is fab value, but the VT package is a TV moment, as much a YT hit, because it's multilayered from a multi talented team.

Recent add on: looking back, the first show of BGT is actually pre-recorded, so while a lot of the above applies, the producer would have had time to construct a bigger overall package of director, and segment producer cut.

On the credits I counted close to 100 personnel, about a third of these would have been directly involved in on the day production and VT. There were 7 offline editors; 4 P&Ds and 4 Exec Prod. Here's the credentials of Jonathan Bullen - the studio director.

p.s The skillset and choroegraphy into an event like this is highly refined over many years. And it woud be a real joy for me to see a new digital media company mimic this to this degree.

Posted by Dr David Dunkley Gyimah at 10:31 am