Egyptian journos look to the future 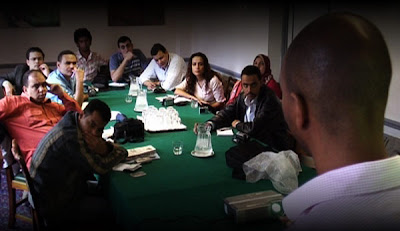 Viewers of BBC Newsnight will recall an item on bloggers from Egypt the previous week. New Media meets the old guard - quite literally in a report by the BBC's world affairs analyst, Magdi Abdelhadi, that gave a perspective of press/ judiciary freedom and how the authorities handle bloggers.

So with the currency of that and my own career interest in ME (though I fess I have been thin on the ground as late) I was fascinated to meet with a group of senior Egyptian Journalists in the UK on a fact-finding tour.

They were journalists of all hues with a few bloggers and twitters as well. The exchange was encouraging and Masters Journalism student Tamer Almisshal whom I invited along gave a wonderful account of new and emerging media and its signficance to the region.

Summed up, Tamer, a former BBC producer from Gaza, who will likely resume his role once he completes the remaining few months of his masters said: "We have the stories and they ( the west) have the technology", adding more or less that learning everything one needed to know about journalism in the UK would stand Egyptian journalists in good stead.

No this wasn't a commercial punt and neither was my lecture peeling back web2.0 plus and video journalism. Any web cum video journalism savvy region could positively contribute to the reportage and understanding of a region whose problems need no elaboration.
,
I remember years back at WTN glued to Sat 41 pictures on the night shift. Back then as now, many pundits will likely comment journalism is healthy and gotten more transparent (not a point I want to argue here) but undoubtedly Newish Media, youtube, digital journalism one could ARGUE has a far more penetrating value ( basket for basket) than how we take it for granted here in the UK.

I have said the same for reportage in Ghana and various African regions. Tarek Atia's site is an interesting case. The tools, the assets - all about improving commuications. It may not be your idea of cutting edge but ranks a healthy 100,000 in google ranking.

He's a busy man, but video, pods etc would definately improve his waistline and those who regularly pay him a visit for the portal news he distributes.

The journalists I met have expressed a deep desire to understand more about the ways of the web 2. journalist; the Tamer's and his class mates who shoot video, pictures, make web sites, blog, index with google rich tags, produce promos and heavens knows what else in these unfolding times.

If it can help us better understand the matrix of ME politics then we're better for it.

p.s here's the book I reccommended Blog by Hugh Hewitt. If you've any other additions do post/email me and I'll pass it on
Posted by Dr David Dunkley Gyimah at 6:56 pm

It has been a pleasure translating for you, especially that we share the same interest: how Internet is changing societies.

Save for Tarek Atia's website (and Dreamweaver!), I think the presentation was very interesting and up-to-date. It caused me to answer more questions from the journalists throughout the rest of the visit, since I am the blogger in the group.

Do get in touch with the group. A number of them are already interested in VJ.

it was a pleasure meeting you as well and the individuals in the group. I really should have tried to contact you before your return to Egypt, so we can talk some more. Have you all retuned. email me so we can find time to talk some more.