Why I wanted to become a journalist - and you? by David Dunkley Gyimah 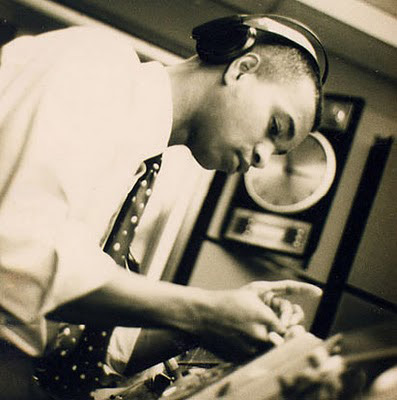 David working in Radio circa 1998 physicall cutting tape before spooling it on a reel to reel before playout- you can hear some of those archive moments on his newly launched viewmagazine.tv site

For some it's a calling; others an easy shoe-in ( a linear extrapolation of middle class status sensibility). Then some fall into it by accident, some are well placed given their indepth knowledge of a subject, and some try as they may will perhaps never reach their full potential.

Journalism is a unique field, a gladitorial arena - many will join its quest; thousands will fail. Not because they are no good, but a range of complex reasons. The 80s was an easier era to become a broadcast journalist; in the 60s and 70s when it was in its nascent form it was much easier.

A brief visual history of videojournalism from david dunkley gyimah on Vimeo.
A timeline looking at one of the areas of journalism that I have practised for a while - Solojouurnalism

Though if you were from an ethnic background; it was problematic. Today, the chances of joining an established outfit against the weight of diagnosed upheavels, makes for serious questioning of : why you want to become a journalist.

Yes you don't have to join the big boys or girls -as the bloggorama has shown, but you'll look to bring in an income.

On Mr tweets journalism the question was asked: this was my response.

Why I became a journalist
In the UK of the 80s if you were black you'd have to gone to Oxbridge for a decent chance of a foot in journalism’s door.

It was a naked, disturbing, crass affair (one that publicly would not dare speak its name). It excluded not just the views of a section of society, but people from sections of society who also felt they had something relevant to share in the public sphere.

Years earlier I remember standing in college cadet garb in Ghana circa 1980s in the midst of a coup de tat, with citizens and friends being shot, indignantly, thinking "people should be seeing this".

That was one of many incidents that later fuelled my interests, I’d see something and say “people should be seeing this”.

In 1994, 6 yrs after beginning my hard slog, I stood amidst the masses in South Africa, witnessing and speaking into a phone to the BBC World Service for the inauguration of Nelson Mandela; People should be seeing this, and it stands as one of the more powerful icons for scratching my itch.

In 2009 I went back to South Africa and fleetingly recorded this.
I wanted to become a journalist because when journalism’s common sense prevails, we have the ability to unveil, expose, talk about those individuals and corporations who feel no accountability for their actions, yet should.

And less it be forgotten tell the most amazing stories about human achievement and those who set examples for us to follow, with the thought at the back of my head that: “people should be seeing this”.
Posted by Dr David Dunkley Gyimah at 8:47 am