The most advanced technology for the future of journalism 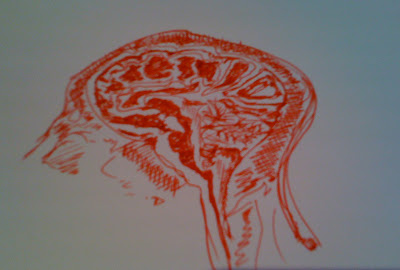 The most advanced technology for the future of journalism is.... (drum roll).. YOUR NOGGIN.

I'm not writing as much now, partly because I realise I need to change this blog's template and also because my spare time is spent buried in books on technology and media.

But I now find myself questioning such exuberance at the expense of those around me and my social development.

The gadget show
Today every gadget that comes to the market has tech journalists pronouncing its "Star Trek" moment in the ever changingling journalism. They too must drive copy!

Poor journalism. It's as if its been caught napping ( which it had), scolded by the ear and told to wait in the corner.

It's getting to the point of absurdity and the professional and amateurs alike ( if that distinction can be made) need to take stock and dampen down their "wow syndrome".

Oh yes I was an Applied Chemist and the wow syndrome as first described by New Scientist in the 80s captures elegantly the scientists penchant for the new. For me that was before I was lured into the ways of the 'scribe ' - the visual scribe.

In 1964 at a news event sponsored by the Radio-Television News Director Association and Time/Life, a senior executive from NBC, Robin Still, announced how in the future small electronic cameras would be small enough to hold with hand.

The world of news was only just negotiating a move from the expensive and clunky 35mm to its poorer cousin, but a new approach to news film, the 16mm.

Oh they must have sneered.

Video I shot in 1997 showed a healthy discourse between members at the Online News Association, looking at the first trial of the Reuters' mobile phone reportage.

The technologists' technologist noggin
Vannevar Bush, and if you don't know who he is, then er shame on you, spoke similarly in his seminal text "As we may think" of a device, the size of a walnut that would facilitate capturing data

"The camera hound of the future wears on his forehead a lump a little larger than a walnut. It takes pictures 3 millimeters square, later to be projected or enlarged, which after all involves only a factor of 10 beyond present practice. The lens is of universal focus"

He added referring to the camera:

"It would be a brave man who would predict that such a process will always remain clumsy, slow, and faulty in detail".

So what's my point? We're in danger of becoming celebrants, no dysfunctional celebrants to technology, when a less talked about asset is human agency; our capacity to dream first before the technology accomplishes those feats.

This is aptly distilled by Avatar Director/ writer James Cameron, who says he had to wait fifteen years before he could make his ground breaking film.

Meanwhile we're caught in a braudrillard-frenzy of instant gratification wooing to be exploiter of the next thing, that any pronouncements have come to resemble a vaudeville carabet. That may be fine, but for the reflective practitioner, there should be more healthy skepticism.

Which is why in Kenya money can be hot-wired via mobile phones and spent accordingly, but it has not yet caught on in the West where the banks woud resist such a process unless there were at the heart of it. 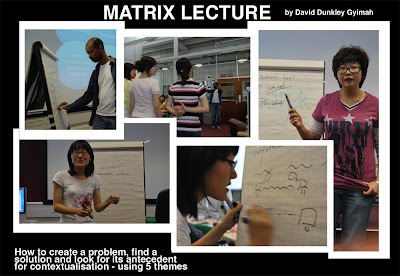 University of Westminster August 201o Students from one of China's revered media universities - address in a low tech way, their ability to think illogically, but rational. Here devising how "wisdom of crowds' might develop
Let me not sound prudish about this. There will always be innovations of a kind that use a technology that may well yield fresh methodologies.Twitter kept the Iran siege alive, mobile phones captured a plane on the Hudson, and a home movie cam recorded Rodney Marshes beatings.

But the innovators can only innovate once, the next one is a has-been and the technology - now available to citizen and professional - risks redundancy as we search for the next best thing.

It's absurd and it's not because I fail to understand Raymond William's theory of technological determinism but that the phenomenological inquiries; the raising of our consciousness, are crucially abandoned in these moments.

Because what journalism or its many actors should, now that's bold David, be striving for is what Arthur Koestler, a former journalist and celebrated author writes in Act of Creation ( and take note Inception fans when he says: "humans are most creative when rational thought is abandoned during dreams and trances..." is:

"The measure of an artists originality, put in the simplest terms, is the extent to which his selective emphasis deviates from conventional norm and establishes new standards of relevance".

We need the iPhone as much as we need blogs and twitter, but the quest is to radicalise their functionalities for new emergence of new cultural habits and find a lasting source of creativity can be challenging - more so if they are seen to be simulations of an antecedent object.

When the next person launches 'lync' - an app that culls twitter feeds so your feed cojoins with others to form a coherent stream of essays e.g. this blog would have been constructed from a series of tweets bound together, how will we use language and social networks any differently?

If the next iPhone allows me to composite and post-produce incorporating basic apps such as Cinema 4D and After Effetcs we might regale in this feat of miniaturisation, but how might it affect us beyond the conventional of a desk bound object?

Here's where we pound our noggin for the underlying emergent epistemology - and it rarely is a simple process. Of course serendipity will also play its part e.g. Dyson took a cyclonic windflow to create a revolutionary type of vaccum cleaner that would not lose suction.

How does this affect and exact what might be different? Otherwise we might suggest, as some have, that whilst we might be more technologically savvy, we're not growing in knowledge.

To unravel that we need to be more critical, enquiring and contextual of what we're privy to today. Living in the now fails to take note of powerful antecedents that could better inform us to push forward. In the end it's the technology that is subservient.

David Dunkley is a senior lecturer in digital media and is training professionals in the "Illogical Rationalist". How to see ideas when they're conformist
Posted by Dr David Dunkley Gyimah at 6:54 pm