Do you speak a video. DO YOU SPEAK VIDEO. YEAH YOU 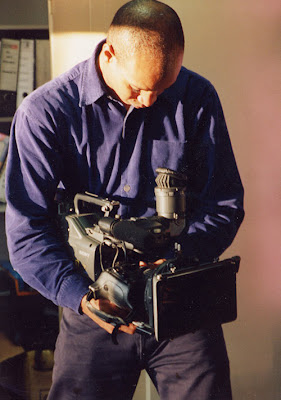 It's really what you do with the camera. David shooting and directing for Channel 4 News, (1999)
The spitting can be quite over whelming; rain coat at the ready

That declaration often comes after three or four forceful recitals. The English do it best, believing at each utterance, by raising your voice further the poor soul, looking you squarely in the eyes will get it.

Except that now, everyone speaks video. All you need to do is point and shoot, which for the cinematographers amongst you does you head in no end.

But you daren't not raise this in the forums for fear of being branded elitist. So there you are pleased as punch, but sneering under your Budweiser's: "See that, none of yous can speak video".

Cuz the experts will tell you, candidly that pointing the camera and following a bus is no different than Judy five years old pointing at Uncle Jim, whose just stolen her sherbet.

It's a reflex action. If you didn't do it your ECGs aren't that healthy.

Video, film, is a reflexive art. It's like painting, You produce, you destroy, you reflect, you learn.

Then you start again, except this time you're wiser and you do it at a moment's notice at some point, before you get bored with the same protocol and decide you want to try something new. 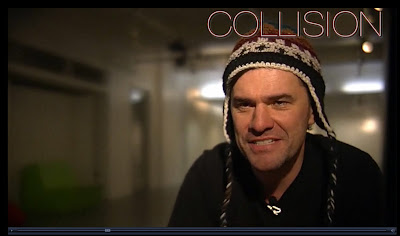 Mark Cousins speaks video. You can hear him and other artists on Collisions, a site I created with the Southbank Artists in Residence programme.
It's a pain, but an intoxicating one. Do you speak video? Course you do.

Look at this. Sometimes just leaving the camera to observe is good plenty, often you'll be praised because you're the only one to have captured the duck chasing off the pit bull

"Now look up for a moment. Look at the spill of light on the left, how non-uniform it is, several grades. Look at the reflection on the table from the tungsten light. Look at the architectural spaces between the table, and its foreshortening to the door. The bin, because of perspective is the same size. Look at the sign that says "silent zone" and the grid above it - the patterns; the row of books that look like transformers and the paper isolated in the corner. Then imagine, something not of your control is about to happen, but you do have control if you anticipate. Now close your eyes, get up an act upon it, on the basis that everything you're seeing, you're seeing for the first time, and it all means something".

Now this could all be a load of b***, but in speaking video one of my exercises is relearning to see a new, remembering the gate of the lens can only see what you tell it; it has no periphery vision.

In Venice you learn to look upwards for the beauty, and down to avoid the dogs doodies. In what one of my favourite philosophers Deleuze says the image is never static. Your positioning affects the image and the consequences, but it's always moving on, and where are you?

Reading Cineast Voll VII No.1 from 1967 I came across this Gian Maria Volonte speaking about Godard

"He really was trying to do the impossible - to negate himself as a director and see what would happen. He experimented with the possibilities of interaction between the traditional relationships within a film crew and the need for a less authoritarian and more collective work process, but to the point he wanted to just give the camera to anyone and let them do their part of the film. ..... ....He is too preoccupied with only one type of problem - his problems - which make him forget the essential - the function of the cinema as a means of communication with the masses, the relationship between creation, production and distribution

Luvely. On the other hand, someones shouting, just bloody shoot the thing. What's the bet they speak video?
Posted by Dr David Dunkley Gyimah at 5:25 pm