Video professional and academic David Dunkley Gyimah takes a personal overview of how important analytics has become and the value of web hosting customer service. Here presenting at the World Association of Newspapers - a gathering of the world's top newspapers


Thousands of miles from my terminal, someone is accessing an article.

From the moment they enter, the time spent on the piece, where they're from, where they go next, data is recorded.

It's probably a mark of how society has changed that we accept such digital sleuthing, for in today's market place such data is crucial and we've come to accept "cookies" and "analytics" as a necessary way of business. 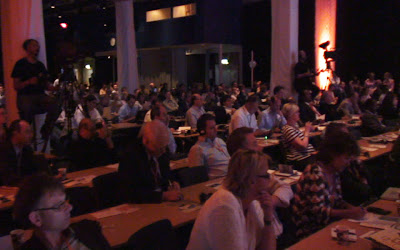 Some of these delegates would later listen to David talk about targeted media.
In the mid 2000s I would often speak to young journalists and executive on the talk circuit that attracting you, meant we'd have to learn to write for the human eye and robots, traversing a middle road.

The inverted pyramid that prescribes journalism's craft has become a truncated set of trapezoids strategically littered with key words. Video, much the same.

The circle is complete. You have a website whose data tells you where your readers are; you in turn learn to write strategically to gain greater traction with those readers.

In June, a visit from a senior figure within the BBC illustrated just how important analytics has become embedded in journalism. Indeed as a video feature I made at Sky News clearly illustrates their content e.g. video and articles is driven directly by their analytics. Now writing for the web is becoming elevated to an art.

This point was aptly demonstrated by a former student of mine now at Sky, who emailed me ecstatic that a lecture on analytics had resulted in her producing the most viewed article that day. 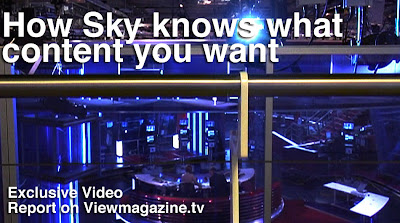 The true value of analytics 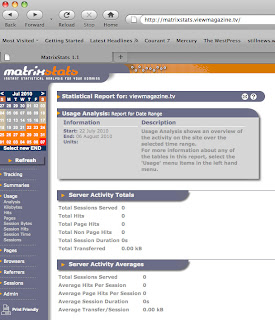 I study analytics examining data on what pages work, how long they're accessed and how the site is entered and exited ( see figure on the right), except in the last three weeks I haven't been able to because the given software has ceased to produce such data and try as I might to politely point this out to my web service provider, Fasthosts.co.uk, there's been no satisfactory outcome.

So here's where this article takes a different turn, from not just the primacy of analytics, but to that of the relationship with web hosters.

My web host is Fasthosts. I have been with them for almost a decade and over that period as the Editor/Web Master of the School of Media Arts and Design, University of Westminster, and conference speaker have either directly of indirectly helped set up accounts probably more than a 100.

Recently, as a delegation we returned from China, Chongqing, addressing professors from some of the country's respected universities on "audiencing and analytics" (See Viewmagazine.tv)

I host my own sites with them and have recently overhauled one of them. Earlier this year I transferred a glut of accounts from web hosters Easy Space, who I felt had lost the ethos of customer service.

I have found Fasthosts agreeable and customer service advisors rather pleasant. I could say more kind things, but I'd rather my comments were not lifted out of context.

So what's my issue? My analytics are down since the 22nd July as the figure (a snapshot of
Fasthosts matrix data) on the right illustrates. I'd really like them back.

You could argue there are other anayltics you could bolt on, Google for example, and you'd be correct, and I might use that, but it misses the point.

When I first went online in 1995, there were only a few web hosters around. I signed up with Easyspace's predecessor. It's fair not only to say today web hosting is a lucrative business, but perhaps has produced the unwieldy situation of how businesses address volume.

Most web hosters have a 24/7 telephone service. With Fasthosts I have often got through fairly quickly. Yesterday at six I finally decided to ring Fasthosts. The person who answered (not fair to give his name) was pleasant and I set about informing him of my issue, which is where I'm now taking another and final turn, in this piece: customer satisfaction.

"If you're not recording this, please do", I asked. And if management from Fasthosts are listening please note.

I'm not an expert on servers and have no idea how long it takes to go underneath the bonnet of of one. It may be that indeed my issue is being investigated alongside the 1000s of others with their individual issues - a question of volume.

But what's relevant is the passage of information.

If, as a car owner, you sent your car in for repairs and failed to hear anything back from the mechanics, you'd be forgiven for being concerned.

If your mechanic, as mine does, rings or emails you at the end of the day to say, your valve injector's packed up and it's going to take them two days to order a new one and another day to fit, perhaps you'll feel more relieved. You're in possession of new information.

So the questions in my conversation became?
These answers allow me to make further informed choice. Like many, I'm a creature of habit so I don't feel put off enough to haul my custom elsewhere, but it's not just courtesy but a professional pre-requesite to talk to customers.

Customer Context
I'm not dissatisfied with my web service provider, and as such this post isn't a critique, but a chat to management or someone understanding my predicament puzzled, yet committed to "offering a satisfactory customer service".

It's important, as she or he will agree, that when you're paying for a service, it's right to have realistic expectations of what you should be afforded and resolutions and good communications is one of them.

And yesterday morning my Fasthosts advisor agreed, so the issue is being prioritised I was told and that he would email me by the end of the day with an update.

"That puts you in an invidious position", I said, "as, if there's no update you'll have nothing to report".

If you're reading this piece, then it's because he didn't get back and I am no more wiser at what's going on.

A footnote: Yesterday after tweeting I did receive a survey to fill in, but I declined thus far on this basis:


"Please note that we will not be able to respond to support enquiries via this survey.
If you do have a support enquiry please visit www.fasthosts.co.uk/support, where you will find a comprehensive knowledge base containing hundreds of easy-to-follow quick guides, commonly asked questions, and a facility to submit your support enquiry online".

I have but can't get any joy. I thought that's what surveys are made to address - issues.

Some days later the matter was resolved.  And an email from the service informed me of the fault. Hope this helps you. For more issues on the web and video go to my main site  http://www.viewmagazine.tv