How do you creative brainstorm yourself - here's mine 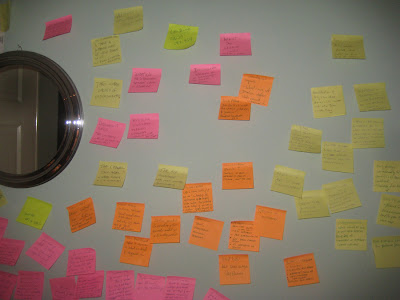 Is this art?
It looks non-descript but trust me, what exists on those colourful notes are liminal thoughts that should save me.

Firstly liminal, what is it? This site provides a wonderful expression

In “Liminality and Communitas,” Turner begins by defining liminal individuals or entities as “neither here nor there; they are betwixt and between the positions assigned and arrayed by law, custom, convention, and ceremony” (1969: 95).

So they're the thoughts, sometimes random you get when you're in a creative moment, or day dreaming. They're there one moment and if you don't capture them, like the character in Usual Suspects blowing his fingers, they're gone, and annoyingly so.

Moments of creativity can often be the catalytic converters to more rigorous thoughts and the process I have developed using my wall at home has also been miniaturised when I go on site as a videojournalist. ( though you won't see it :) )

Remember there's often a lot of noise around you, at home and in the field, and you need something to capture those Tourette syndrome thoughts.

So here's what I do, at least at home with my creative wall. I'm currently in the middle of doctorate research programme to illustrate news and television in the future.

Yep I do pick em, so usually when I get up in the morning, around 5.30-6.00 I have these liminal thoughts about something I might have read the day before or mulled over just that morning. These inchoate thoughts find themselves to the creative wall.

I then set about writing and developing my chapters independently. If I get another thought say like writing now, I then stop and put that on the wall.

In time I then in a reflective mood go back to the wall and see how those lightening thoughts square with the more measured reflective self. The results are often staggering and will lead me to rework scripts.

In the field it's a more active process, but I will switch off momentarily to reflect or grab postits I might have made. In away it's a fashioning of the reflective writer/ videojournalist working from creative spurts.

Thus questioning or forging fresh methods. It's a jekyll and Hyde approach in the absence of anyone around you to bounce of ideas.

I used a similar technique working in advertising, and I know many many editors who use the same technique. If I can eventually get my book out from underneath all the present projects I talk about some more knowledge building exercises.

This one might work for you.
Posted by Dr David Dunkley Gyimah at 11:17 am