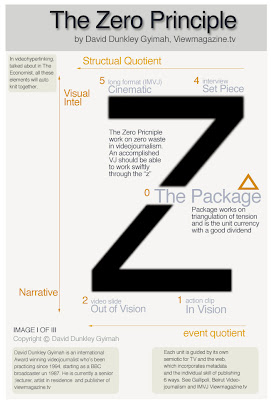 As stories go, a hospital closure, this wasn't a difficult one, but it had legs. That meant it could pan out through the day and carry an arc of interest.

Have you ever wondered how broadcasters shape their news throughout the news cycle? More of that in a minute.

I am just completing my MPhil to PhD transfer at SMARTlab (which includes a fmr Nasa expert) and coupled with the extensive training and insights with others and 22 years broadcast experience have quite a bit to share.

One of the things is how I believe later architects of videojournalism have not quite realised the potential of the form's semiotic. On the other hand there are a number of VJs worldwide who are truly pushing the form.

It is to a video revolution what impressionism was to art or French New wave was to cinema - that was the theory anyway. But producing a new language assumes one is well versed in the literacy of video and visual form.

What is video Journalism and how you build a VJ outfit from david dunkley gyimah.

The News Cycle
By default their news is driven by time pressures filling the bulletins and then furnishing the extra outputs later on.
You can't have a full day's meal in one go. So sometimes even when the news item does fulsomely present itself, the oblique strategy is to weigh the consequences of the dividend-yield (amount of viewers watching to the effort exercised ) and consider going big later.

Of course these are temporal decisions for time-based media i.e. TV, but have been transferred to the spatial planes of online.

The Telegraph's MPs Cash saga report stretched over many days illustrated this well. Super chip technology that could run computers at mega speeds today is another example where for monetary reasons the technology is held back.
Broadcast News have crews. You as a videojournalist do not, so it pays to understand zero principle. The executives I'm helping to build a VJ station get this. 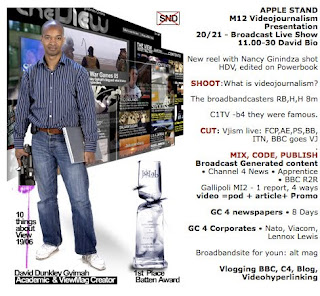 The Tao of News Packages
Mostly all news packages start off with a main contact- the axis - that makes the item possible. Think of them as the reporter's deep throat. See if you can spot this watching the next broadcast.

The unit of the videojournalism piece, just as in broadcast, is the package. It's the piece that often yields the biggest rewards with rolled up sleeves. It sits at the nexus of the Z principle. Below it lay other considerations.

Above the trapezoid stem of the 'Z" is the possibility of developing the story into a cinematic package - the long format feature that's going to pull further eyeballs and become a reference.

But just as in branding terms it helps enormously if there is a perceived quality. It's a boon if your news site telegraphs what viewers can expect.

Embed video, but what video?
In 2005, the good people of the Batten Awards in the US saw this on Viewmagazine.tv when I started using embedded video clips extracted from the package. Two plus years later at a London gathering of ONA members at the BBC, executives would confirm in their own test the value of the embedded clip.

But this feat doesn't and shouldn't stop there. The TV clip is a powerful example of the "action clip" or online the "meta clip" or "action clip". In television bulletins it's the 30 second or less bite. Online it needs to reflect key words and be self contained.
Emerging Techniques
As we move about in ever more refined social networks how we singularly capture the essence of the video package to have an impact within our social news grouping will be more pertinent. That's for the another discourse later.

But for now, the image at the top illustrates the Z principle strand of videojournalism, delineating between structural and event-driven packaging, the aesthetics weighed against the narrative and how if you plan for the package with the Cinematic aesthetic in mind, there are further spin offs, not least you'll have material to pull in further viewers.

This isn't an ad hoc procedure, but one which will strengthen both your output and skills in turning around packages to meet the demands of your output.

By the way when I got back from my story with all four elements ready to run, and with enough material for 'ownership' of a long format the director of programmes, Nick Pollard sent me a memo, which I have since kept.


In the following chapters I'll deconstruct how with the minimum of effort you can turn over each unit in good time, from techniques derived over the years.

Viewmagazine.tv - a mathematical personal sojourn of expressive video making.
Viewmagazine.tvs, David Dunkley Gyimah, an Applied Chemistry graduate, has been training videojournalists since 1995. He's been a Videojournalist since 1994 and a broadcaster working in front and behind the camera for some of the worlds' biggest news brands e.g BBC. ABC News, WTN and Channel 4 News. He lectures in IMVJ.
He's recently returned from working with Rich Beckman, Knight Chair of Miami University, in South Africa. When he's not teaching, he can be found at the South Bank Centre, where he is an artist in residence, creating a range of pieces.
Posted by Dr David Dunkley Gyimah at 7:30 am