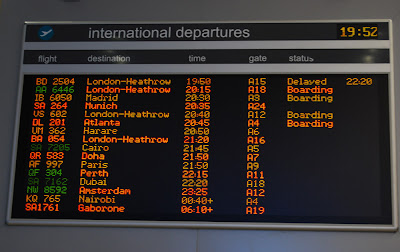 There was no marketeer coyly hanging around the lounge. Just as well because the invective could have been one of those that questioned the poor soul to ask: "Why am I doing this job".

South Africa boasts one of the most disciplined and titanic rugby squads there is. Their travel-flight industry could sorely do with a few tips from the Springboks.

Unfriendly, surly, laisse faire, are just a few adjectives that you could use to rewrite their brochure.

This isn't an anti-South African position, more a plea to someone to sort things out. With a world cup due if what I experienced was anything to go by then the dentists chair may hold more allure. 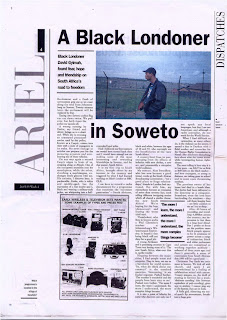 BBC Ariel- The BBC's internal magazine which featured an a full page dispatches article from South Africa in 1992. SA Airways were instrumental in helping David travel across the country.

It wasn't always the case, and less I sound bias, South Africa airways once in my inquisitorial role of journalist-in-waiting sponsored my unlimited travel around the country and from then on I was a loyal customer, thanking them profusely on a late night BBC show I co hosted.

But scale and expansion have the habit of flummoxing many companies. From a mid size international airport, South Africa's minted international OR Tambo resembles Miami International and Heathrow architected into the future.

And somewhere along the way, perhaps someone forgot to rally the staff and tell them, "it's the customer *********" (Clintonesque phrase).

Or as the Ghanaian's express in one of their favourite phrases:
"fefe na efe se obaa otu amirika oso ne nofo na enye se ebe te ato nti", which loosely translates when a woman runs she holds her breasts not because it will fall down, but because of decorum.

I'll post a more detailed report later, which will wrap with a plane cancellation, an on board entertainment system for an 11 hour journey that didn't work and a humble request of what I'd do. And yes some, indeed many may have had the riches of sojourns.

Joburg City
But to the city that thumps like a never ending samba party. Joburg mixes the tonic of youth and wisdom of sages. A world in one city is more apt now since I was last here filming a documentary called the Successor Generation for Channel 4 News.

On arrival and courtesy of my brilliant host, a senior SABC creative, and an old time friend from 92-94, we painted the town, albeit less than red.

SophiaTown, an eaterie, opposite the landmark Market Theatre does live music and burger food. It's not what it used to be said Palessa. A play dealing with black sexuality featuring nudity had already wound up for the day. "Yah you should see this David" she said,"good edgy stuff. This man emerged during the break requesting a cold drink of water. He didn't know what hit him".

So to one of the heartlands of my media past. Melville.

Melville is St Johns Wood in the UK and bohemian Soho in NY. We sat outside a Portuguese restaurant, me watching anyone that walked by I might remotely remember from back-a-day. The waiter, who was buying time before his calling -a degree in architecture - described one dish with a fish called "Emmeralde".

Funky and yes that was its name. Really! The Chef doing the rounds at the tables said so.

News about Town
Palessa and Addie (name shortened), are a treasure trove of information.

*District 9 - All is not well in SA with this sci-fi blockbuster with rumours ( I've not been able to confirm) that subsidies earmarked for the film from the government are being with held. The brass, its said, do not approve of its racial undertones. Here's a post that gives a flavour of that.

* DDTV - Digital TV is a coming to South Africa with licenses already doled out. South Africa's Net penetration is minuscule, but mobile and DDTV could jump its comms and ents industry into a new strata

* Castor Semenye - publicity handled badly, but what about that photoshoot. It's in You magazine, an exclusive, which has Ms Semenye glammed up.

* World Cup fever and the rush for gold.

Meanwhile, one short piece I'm glad I made - more a snapshot- is a visit back to where I lived during 92-94 in Yeoville and realising how much its radically changed. See for yourself, though it'll be difficult to contextualise unless you remember how Yeoville used to be

More and some later.
Posted by Dr David Dunkley Gyimah at 6:40 am