Videojournalism. It's more than news, plurality, diversity to name a few 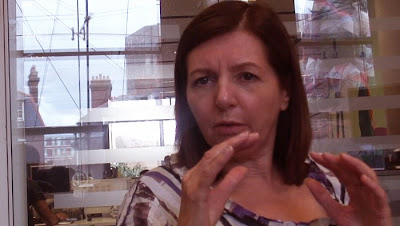 I interviewed one of the UK's respected senior broadcast executives today.

Dorothy Bryne is the head of news and current affairs at Channel 4.

It was a wide ranging interview around the future of news. I have been interviewing some of the well known figures in news e.g. Dan Gillmor, Craig Newmark, Jeff jarvis since 2005.

I hadn't formally started my thesis then, but by nature I'm a collector. Later this week I meet the figure behind convincing the late Sir David English - a powerhouse in British journalism for many years until his death in the 90s - for bank rolling videojournalism in the UK.

On my way home from the interview I reflected on a couple of things, which I intend to expand on later.

1. Videojournalism is about the person. You may be visually gifted and that's a plus, but that can't substitute the bloodymindedness of good journalism, which is story construct from nothingness. By nothingness, eking out something of good use from the chaff of every day chat

2. Videojournalism delivers the media multi linguist. One of the assets I discovered working as a videojournalist within a broadcast framework was an ability to speak to different professionals in their own language. You may not need to know what an "L cut" is, "top and tail", "As live" or any number of strange broadcast terms, but it helps, particularly in team settings.

3. Videojournalism was meant to deliver plurality. Diverse groups delivering their stories. In the UK, many senior news exec lament the lack of a diversity in journalism, which would vary the news agenda.

The true strength of videojournalism, the efficient use of this tooled up practice lies in some of the aforementioned in the features and the news, in holding people to account and to expanding our horizons because we have both the aptitude and tools.
Posted by Dr David Dunkley Gyimah at 10:40 pm