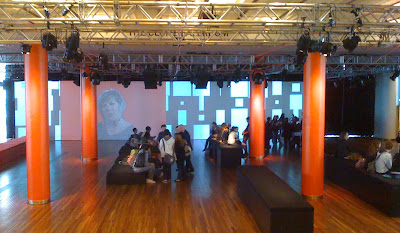 At the inception of TV, the wise counsel of film decided they needed something that would differentiate them from the new pretender so they introduced panoramic screens.

That brought on the 16X9 format and in some cases 35mm went 70mm. Some star film makers hated it complaining how they'd filll the space. Others, particularly directors, who shot Westerns took to it well.

Today we are suffused with a cacophony of screen formats outside the cine complex and the pic you see above is that from the South Bank, which is often used to relay shows in the Festival Hall.

It's a great canvas and one I'm hoping to use, but not until I have thought through a project that would best use the dimensions
Posted by Dr David Dunkley Gyimah at 7:10 am