From Arab to African media, West to East-the power of videojournalism 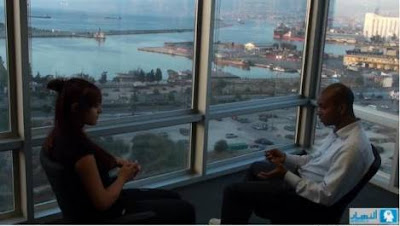 Travelling and lecturing in videojournalism further strengthens my already robust resolve that the tools and media skills for reportage, important as they, cannot be seperated from the understanding of the dynamics of human behaviour.

Four months ago I was in Beirut, swapping ideas with some of the emerging videojournalists at one of the country's leading independent newspaper's, Annahar. Its videojournalists are breaking into off-agenda stories to furnish their audience with a wider knowledge of its people and news.

I was drawn to the journalists' energy and their desire to push at the form; their want to landscape something bigger and interesting for locals and internationalists.

In the above picture Joanna is interviewing me on a one-on-one. It preceded a training session to shape the format visually and literally to keep it interesting.

There are many iterations in video and videojournalism and more often than not I am made to feel fortunate about a position I have come to occupy. It is one I neither take lightly and continue to feel indebted to the many people who have helped shape my ideas.

That position assumes a wide understanding of forms and associated behaviour.

But believe me, particularly at the time I was freelancing for any number of network broadcasters, travelling to danger zones to produce the news because that's where the story was, learning how to 2-machine edit and work a $60,000 beta camera because I couldn't find a camera operator/editor, I cursed my fortunes.

The business of video story telling and videojournalism is a journey of the visual art of information, a process in which I'm oft heard to say the square root of four is not two.

It's a creative medium bound by guidelines. For me also it's the journey of as many highs and sucessess as it is lows and failures.

There is no one fixed stanza, no absolutes, no definite way of story production, but I do know the value of a ethical qualified journalism and visual essayist lies in understanding as many of the different forms often, very often by working those genres.

Anyone of these has its semiotic. And in the age of web communication their boundaries continue to be tested, which I believe they should. But there is a constant, though attenuated by nuances of culture and that is people.

Journalism - story telling involves people and we, people, are complex sentinents. But we also exhibit common traits. Traits that lawyers, doctors, managers and many other professions rely upon to make sense of things e.g. who's guilty, an illness, workplace hiearchies and the rest.

Journalism's abilty to make sense of these depends strongly on understanding codes, guidlines, genres, cultures abd being empathatic, curious, understanding and above all forthright.

Which is why I'm often baffled when I ask friends who aspire to be journalists or have been, do you watch television they reply, no.

For as bad as sometimes it is, and it's not the only medium to learn our craft, it is a stage where much emotion plays out.

If you want to learn how to fish, why go to a blacksmith. If you want to know how the clock works, you should have a desire to open the casing.

And slowly methodically work you way through. This thing we do isn't rocket science, but it asks for more than the pushing of buttons and elegant framing.

Tomorrow, I'll tell you more about where I am now and the debates we've been having
Posted by Dr David Dunkley Gyimah at 2:22 pm