10 things you must know travelling to South Africa's world cup 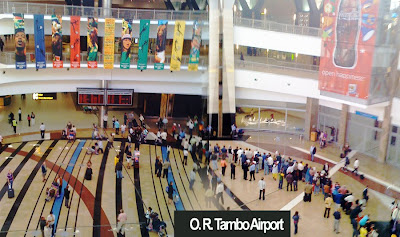 From door to door , 23 hours. In the air it was about 14 hours. You have to love travelling, otherwise like me you simply go numb with the vacuous look of Mr Mcgoo, consigning your brain cells to reruns of old movies and boarding school meals.

The stewardess either resented her job or didn't much like anyone who didn't do things her way and one of those was a red card for lowering your seat rest to sleep when the person behind you wanted to rest their bottle of water.

"Please sir, could you bring your seat up?"

Half a sleep and feeling restlessly drousy I queried her with my eyebrows.

"Sir put your seat back up!"

It was so incredulous that after the third time of her asking and clearly not noticing that when passengers are tired they pull their seats down I relented.

But as I found out later, seat configurations, particularly in the lie down position is to be one of my "10 things you must know travelling to South Africa". First five today.

Swanky
It's been a while since I have been to the rainbow nation, but if my visit were by default a dry run for the World Cup ahead, then there's work to be done.

Swanky, face photography recognitionn at immigration, an meandering string of tourists around their maze like queing system, in many ways it's as if the architects that built Miami Airport provided the foundation here.

South Africa boasts some of the most hospital people, particularly in the townships away from the dreaded "c" word. But Corporate customer service on the scale that will sazzle them next year is new.

And if you thought the hospitality is likely to bring on unsuspected results then here in Grahamstown, you might want to wear a plack saying "please be nice to me".

Next year in Grahamstown, the venue for one of the world's key arts and culture gigs, they'll have the world cup in tow, and a stream of big conferences for journalists and others.

The build up to the World Cup prompted Richard Quest and CNN to examine the system, rolling of a reel of states - from a programme I saw on my flight.

More on those in my next post, but for the meantime an early foray into what you'll need to know at the airports if you're comng for the World Cup, particularly for domestic flight travellers to the Cape and beyond

1. Through to domestic flights, if you haven't changed any money yet, there's no forex etc past on board luggage checking.

2. There's only one small rest room, which is a little daunting when greeted by the attendant: "welcome to my office" and hasn't quite figured that restroom are private. That said please do tip.

3. Don't rely on the Flight departure board for boarding. It got to 10.00 for a 10.20 departure and still there was nothing up so I curiously sauntered over to the gate to find out they had all boarded and the steward telling me how lucky I was to have got on the plane.

4. Don't put you seat back to rest unless you want the steward or passengers to literally scream at you

5. Do remember your please and thank yous.
Posted by Dr David Dunkley Gyimah at 2:11 pm