Young people don't do journalism. Oh yes they do but not your model 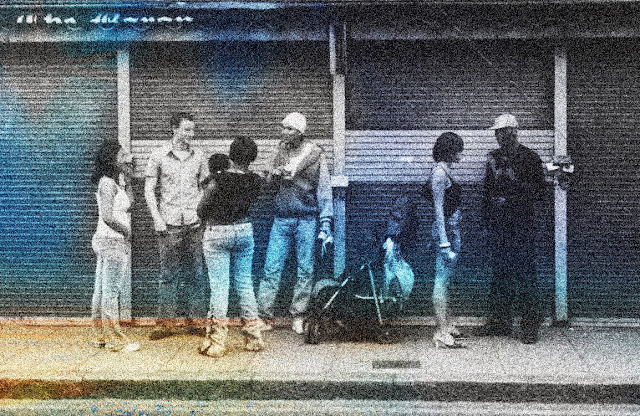 [Scroll down to the bottom for Q's response and the Twitter-debate this morning
Late mention VICE does journalism like the networks wouldn't know. I mean the risks]

The statement: young people don't do journalism is incendiary in itself, because it assumes all young people are the same. Urrchh!

However, attracting the young, and addressing ethnic groups in the UK is a perennially vexing questions for journalism makers.

Adding ethnicity to this debate complicates an already insoluble situation. You could separate a black Brit, an American and Ghanaian on as many issues conceivable. None of them is the same.

At a micro level on a small suburban street in South London with an extended Black British family, each family member is different from their sibling.

Sharing the same skin colour has provided a convenient and erroneous monocle that black people are the same. As they became inhabitants of Elizabethan Britain, yes in 1600, the concept of a black community - a oneness took shape - which was made popular in modern society.


So for this argument and it's still a facile generalisation, I'm going to be talking about 15-30 year olds, who might use terms such as "on road" and "brethren".  Many are black youngsters, but not exclusively so.


Even then I'm on a slippery slope, because the fact that ten or more people can be categorised by their association with Jamal Edward's SBTV, does still not make them a community.

They may not have bought The Voice newspaper -- a paper targeted at black people in the UK when it was in circulation. They may not have listened to the Today programme, or watched BBC Newsnight, but that doesn't mean they are no less interested in journalism.

The question becomes what is meant by journalism. It's a healthy debate for our times, as the institution known as journalism atrophies and dies of a thousand cuts.

The venerable journalist, Professor George Brock, from City University tackled this very question in an address to students.

We can't talk about journalism without understanding what it means and going back to its source. This is a crucial lesson for anyone seeking to add to the debate. Thankfully, several accessible texts exists, such as Andrew Marr's My Trade and Bock's recent book: Does journalism have a future reviewed by another stalwart of journalism, Nicholas Lemann.

Whatever journalism was and still is in the pursuit of fact or truth is not denied. Read the Elements of Journalism, but the digital age has revealed the sharpest of schisms. In Simon Blackburn's Truth, the history of "fact" is contestable. It still can be and is the reason why we have a jury system to determine who is telling the truth.

In Journalism it would take Daniel Defoe in the 17th Century to be one of the first writers to aspire to verify and validate events - this was fact-checking in its nascent form.

While many experts attest journalism is in trouble, and some blame the business model, the reality (dangerous word) is more obvious. Journalism, broadcast journalism in particular, as an export of a universal truism form does not hold.

Fact, as a mathematical model is more stable. The square root of 4=2. In the social sciences of journalism a man weighing 145 pounds is fact, based on evidence. Whether he is described as heavy or light becomes culturally-bound.

The biggest myth that journalism ( the establishment) peddled to scores of journalism students, particularly in the analogue age was how journalism consisted of exclusively fact-based reportage and was immutable.

Before the arrival of digital it was a FACT as many journalists would tell you that no one else other than a professionally trained journalist could do journalism.  But in 1994, myself and 29 others did something called videojournalism.

Revolution is not videojournalism from david dunkley gyimah on Vimeo.

In my PhD research,  one of the UK's most respected journalism executives Stewart Purvis states: "Until Channel One came along the myth was we (professionally) trained journalists said no one else could do journalism, but Channel One shattered that myth".

Saying journalism is fact is the same as saying a photo never lies, and if you think that then you need to read Barthes.

US academic Michael Schudson argues that journalism is a social construct. It is in effect story telling, but a form of storytelling that is dependent on a host of variables: objectivity, impartiality, balance, truth....and Schudson's factors such as culture, society and literary values.

What we often categorise as fact in social science e.g. journalism boils down to the homogeneity of group thinking within that culturally same group. Before I could work for the BBC I had to tacitly demonstrate that I thought the same as the journalists I would join in my interviews. I did.

Don't misunderstand me. I am not knocking journalism. But the lid has come off and we need to be more transparent at its strengths and limitations. If you consider yourself decent, law abiding and are cuturally and societally- sensitive, then you have the certain values that strengthen you as a journalist.


Now, the sort of journalism that our 18-30s are interested in becomes apparent. It must be something that is attuned to their culture, society and literary values.

The Chancellor's budget speech dealing with structural deficit may have little value. DJ Spooney's profit margins and how much tax he's paying is the dog's b****cks.

Back in the early 90s Janet Street Porter's Reportage, which I was a part of as a reporter tackled what the 18-30s wanted head-on. We were the storytellers talking to our target audience.

Today, Journalism's universality is crumbling. BTW it's not just journalism. Any grand theory about anything is crumbling ( See Lyotard).

Young people do journalism, but a journalism they know. In a socially mediated digital age, the evidence is there to show that you can produce powerful stories -- journalism that aspires to be fact based and objective, but it requires a shift from the hegemonic-laden, A, B, C1 market-orientated approach adopted by the institutions.


Socially mediated 'ournalism [ CORRECT]
Back in 1992, I co-hosted a show on the BBC called Black London where I met a young entrepreneur called Q. Q had produced a book called Dead Meat that was culture personified. Its language was teutonic, A UK Wired years before the US smash hit show.

Another book Yardies delved into a world so alien to the police that Scotland Yard requested its officers read the book. It was a fictional script so close to the bone of the notorious Yardie gangs, which were said to have become a feature of the British crime scene.

Several years later Q was telling visual stories from his prescient examination of UK society. His film Fedz may be fiction, but Q knows a thing about how his target group ticks.   You don't need to use the socially-loaded word "journalism", but Q's comprehension of stories reminds me of something Scorsese said.

For Scorsese fictional films was based on interpretation whilst documentary was about facts, but he could move effortlessly between the two. Another filmmaker Paul Greengrass of Bourne Identity fame is the same. He is a documentary maker who brought his aesthetic to fictional film.

In the 1930s one of the the most important russian filmmakers Vertov was greeted by his critics with the understanding that whilst Hollywood created cinema, Vertov detected it.

I understand this statement well as a videojournalist.  I can look at an event and apply a factually news- based style or one that is cinema driven, based on Vertov's understanding and is still aspires to be factually true.

When I worked with young videojournalists from Annahar newspaper in Lebanon, which wanted to attract younger audiences we were able to distinguish between the traditional model of journalism and that of the social-media age.

Q is a storyteller whom I wager could be the 21st century model of the story teller-ournalism.

Young people do journalism but one that is predicated on their cultural and social values. Journalism's high-minded attitude that it has to inform us may be somewhat misplaced in the social world of digital. David Dunkley Gyimah has been a journalist for 25 years working for the likes of Newsnight, Channel 4 News and ABC News. He was a freelance journalist based in South Africa between 1992-94 for the World Service. He was one of the UK's first videojournalists. In 2002 he was Lennox Lewis videojournalist as Lewis fought for the Heavyweight championship with Tyson. He completes his PhD into news and its future in 2014. He is behind the award winning site www.viewmagazine.tv . This year he is the chair of jurors for the RTS Awards in innovation in broadcast journalism.

So this morning Q - a social Network mover and shaker responded from seeing a twitter debate. This is his response and deserves a good read