Over to you from the BBC - Reporting Egypt, the African aspirational view and what to do next?

I can see myself now, getting ready for lights off 9.30 p.m. and quietly turning the dial of my portable radio to the short wave of the BBC World Service. The din of the crickets suddenly became inaudible.

The photo above cryogenically preserves those moments. Memories as Barthes professed at photography's ability to evoke the past and present it to the future.

Today I listened to Richard Sambrook presenting Over to You at the BBC World Service and that special transatlantic relationship I developed came pouring back.

Years later I would freelance for the BBC World Service, whilst reporting from South Africa. Who would have guessed? Certainly not my dad because abandoning all efforts to become a doctor strained are relationship for 15 years. We never spoke. The media was no match for doctoring.

And if it means anything I took the sciences as far as I could in a BSc in Applied Chemistry before fulfilling an ambition.


Over to You
Richard's  programme touched on two areas I feel passionate about sharing.

Firstly, and it was the last piece on his show, an African rang in complaining that there was too much African material on the BBC World Service.

Certainly when I listened to the World Service (WS) those years back, I confess I certainly wanted to be transported out of the dreary surroundings of Ghana's coup de tats and harsh standard of living.

Yesterday in my blog I spoke about journalism as a cultural construct, purloining American academic Michael Schudson's argument in the Power of News.

Africa is one of the BBC WS' most important regions. Letters from Nigerians and Ghanaians are a mainstay of the postbag. So it's reasonable to consider how reportage is geared towards the continent. The Africa Service, whichI freelanced for alongside Rageh Omar brings back fond memories, but this was about the WS in general.

The caller from on Over to You, sought from the BBC a window looking out onto the rest of the world. Is this cultural? Somehow, there's something in this. The media when I was in Ghana was in Vertov's words 'cinema' with its ability to transport me to new mental territories.

My sister today would hardly read the Voice Newspaper-- targted at Black readers  but give her the Daily Mail any day. Aspirational media and stories of celebs have more currency.  When I spoke about journalism and culture yesterday it was to advance the idea that audiences ask different questions about their journalism.

In this media below, I asked a group of my former Master students if they could change one thing, what would that be. Listen to Daniel Kofi from Ghana speaking about the media. 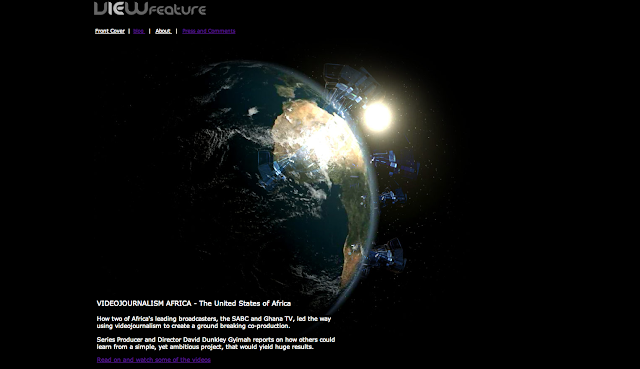 The next segue then. Egypt and its reporting, which is by no means an easy feat. The country as Richard stated in Over to You is polarised and striking a balance in reportage is increasingly problematic.

Two areas struck me. How event-based journalism -- sort of dramatic cinema verite reportage brings to the listener news as it happens, but runs the risk of being interpreted as symbolic of a grand narrative.

The BBC's Middle East Editor Jeremy Bowen is one of the BBC's finest, but it's not his fault that the institution is not articulating the argument of the challenges of executing balanced reportage more effectively.

I interviewed a former BBC foreign editor last year. Vin Ray reminisced how during the Bosnian war when he was producing another big hitter reporter, replaying a context piece ever so often would have helped the audience understand the complexities of the war.

Over to You's much respected editor, Joanna Mills, missed an opportunity here to explain. These verite reports convey news' dramatis. As Robert Drew would have said, giving you the feeling of being there, but this is not a substitute, which the audience can be benignly ignorant of, for contextual themed reportage.

However, to the audience if it's on the BBC, it must have been thought through for its balance.

The Egyptian caller from Canada was suggesting the Brotherhood was monopolising the news and the BBC was not being as effective at countering this.  Editing is a nuanced job; it comes from years of experience and a feel of the audience, which is truly difficult in a social media age.

However, either the Brotherhood's PR machine is doing its job of staying in the headlines,  or difficult but transparent decisions could be arrived at by the BBC that limits their exposure and pursues wider contextual reportage. Otherwise is it fair to use the Net to solve the temporal fixed-amount-of-time problem?

Grand theories or otherwise universal themes will always be difficult. You couldn't please all the audience in the analogue age, whilst in digital, really! Good luck!

Last year at NewsXchange, professionals were advancing the idea of more metric-based data that would strengthen broadcast reportage. That needs to be considered. Meanwhile greater transparency with the listeners about the task faced could be aired.

The hegemonic model of news is only so because no one dare tinker with it, but is there an issue in a news bulletin to explain why today you're running a piece that does not take account of the Brotherhood.  Of course that opens up editorialising, which for the BBC's defence is what journalism does all the time.

The caller also stated a high percentage of the population were against the Brotherhood. If there was ever an opportunity to marry journalism with pragmatic academia this was it with the BBC commissioning its own poll to substantiate or disprove this.

Seven years ago, I was invited to train journalists, videojournalists in particular, at Nile TV - a job that continued up till 2011.

When I was invited back to speak at the Arab Summit earlier this year, my host explained. It wasn't that Egypt doesn't have a wealth of media, joined by online news sites, but that reporting had degenerated to internecine combat. 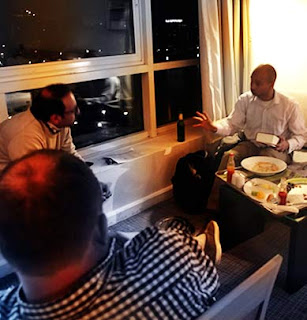 Being open about the intricacies of attempting grand narratives was something we discussed with the audience. It's a first step I believe the networks, in spite of all their might, could do.

Remember Dan Gilmor's oeuvre, which served as a manifesto for many traditional media in 2006.

Gilmor acknowledged his audience knew a lot and that he no longer had all, small "a", the answers.

Reporting in the Social Media age is problematic. Given the tools and fresh discourses, we journalists could do a better a job at explaining.

By the way, in response to my article yesterday, a promising social media networker Q has responded in a feature-length post here.

The original post I wrote can be found here.

Next week, how one of my posts in being featured in a popular publication concerning safety in filming in Syria. I share the experience of Master students at the BBC's hostile reporting event in November with my assignment near the Turkey- Syria border training videojournalists.

The footage has been made into a trailer and is part of my PhD submission on videojournalism with films I made in China, Tunisia, Egypt , US and South Africa


Posted by Dr David Dunkley Gyimah at 2:57 am