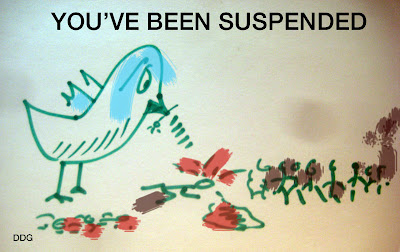 On Thursday morning, awoken by suited men, posturing over the World Cup including David Beckham and a future King I turn to twitter.

As I seek to switch on my tweeter account, the radio announcer says the UK's PM is likely meeting Jack Warner now in an attempt to win over this influential figure within the World Cup movement.

I look outside the window; another cold Arctic night, wildlife and human life seeking shelter from the blizzards enveloping this smallish island. Not a bird shrill in the air.

When my Mac springs to life, one bird I note is very much alive makings its presence known and its beak has just taken a flesh-wounding peck out of my digital persona.

My Twitter account said "SUSPENDED". Surely (shirley), a mistake; the last thing I pitched to the big bird was why everyone should honour Vertov.

This is neither profane, nor inappropriate. Even the Russian critics have forgiven Vertov - a film maker long passed away.

I should have had a letter saying why; I hadn't. So I've asked kindly if my account can be restored. This is the email I have got back.

Hello david dunkley!
We understand that you're contesting an account suspension. Please be sure to read this entire email; you will need to take further action in order to reopen your ticket and trigger a review of your account.
Twitter suspends accounts for a variety of reasons:
• If your account was suspended for aggressive following behavior, you should have received an email notification to the address associated with your Twitter account. You'll need to confirm that you've removed all prohibited following automation from your account, and will stop any manual aggressive following behavior. To expedite your appeal process, please review our Best Practices page if you haven't already ................ ( I have edited for this post)
• While we strive to avoid mistakes, it's also possible that your account was suspended in error. If after reviewing the Rules, you have no idea why your account was suspended, just reply to this email indicating as much, and we'll take another look at your case. Our apologies if the error turns out to be ours.
Thanks,
Twitter Trust & Safety

How? Twitter, a private service I, like a kerbillion others have signed up to, has erroneously deleted, discarded, pecked-the-living-daylights out of me.

The consequences? I can't tweet. Any of my dear friends reading this may be inclined to think he's an undesirable, flee for your digital life.


This is a disaster?

What, I thought, would be the consequences other than a PR faux if uber tweet king @StephenFry was snapped ruthlessly as I have. "Stephen - your account has been suspended because you said something in prose".

Something untoward happened recently with twitters APIs requesting log-ins for no reason - reported by Wired . Are the two connected? Is anyone else been twilled by Twitter?

As I wait, to be reinstated. nothing. What Tweeter giveth, it can also taketh. Who knows who might be next in this lottery pecking?

The big bird regularly takes a big poo over transgressors of its service and rightly so, say I.  Er except I have not threatened or done wrong to the blue bird or anyone else for that mattering hovering in space.

So, I wait.. Apparently I'm in a queue a digital tunnel with a verdict pending anytime soon or not, depending what the rules are for banishment.

So I ask you to please in the name of the Dodo, to scour my recent posts @viewmagazine and help me  identify my wrong doings? Help a fellow person being henpecked for goodness sake.

It all rather reminds me of an interview I had with a fellow called Dirk Coetzee, whom once headed up South Africa's shadowy police force years ago.

The comparison is absurd; lives were destroyed in his case, families ruined, but it didn't stop me thinking how wedded to a system we have become and how therefore we are at the mercy of that system - even when we're  innocent.

Then I received this

Hello,
Your account was suspended because it posted updates that indicated that it was compromised or hacked.
I have un-suspended your account. When you log in, please be sure to reset your password. If your password no longer works, you can request a new one here:
http://twitter.com/account/resend_password
It's also extremely important that you take the following actions:
a. Scan your computers for viruses and malware, especially if unauthorized Tweets continue to be posted in your accounts even after you've changed the password.
b. Use a password that you don't use anywhere else and never use the former password on a compromised account. Create a new and difficult password unique to Twitter that consists of both letters and numbers.
c. Check the Connections page at http://twitter.com/account/connections and revoke the access privileges of any third party applications that you do not recognize.
d. Avoid providing your username and/or email and password to untrusted third-party sites, especially sites promising "more followers fast."
e. Remove any updates that you did not post personally to your account.
You can also visit our help page for hacked or compromised accounts at:

Learning zone
So what did I learn, which I can pass on fron this episodes
1. Keep calm don't fire of angry ees. It's not personal
2. Use the email  from your tweeter account to talk to tweeter, otherwise as I did in the furst hour emailing from an alternative account, twitter won't know who you are
3. Follow up after a period; I did after two hours, still being polite
4. blog about the experience so others might benefit from your experience - optional
5. email a friend to tweet for your liife back - also optional
6. Wait.
7. Thank tweeter - optional.
Posted by Dr David Dunkley Gyimah at 8:35 am