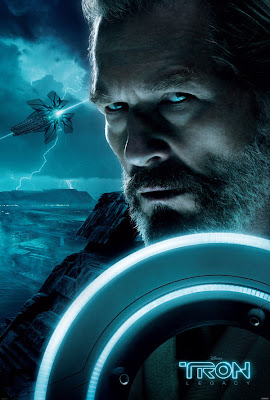 Stunning, simply reviting, a film for the mobile Pad generation

Tron 3D legacy will blow you away; it represents a quantum leap in sleek graphics and draws on one of the coolest nonchalent actors around Jeff Bridges, reprising his 80s incarnation.

You could run out of superlatives, before you notice within the streams of white blinding light, there's a glowing digital elephant in the room and in Johnny Darkoesque fashion it won't go away.

Older abascus-dependent folk who witnessed Tron in their youth will have returned for the Nostalgia.

Younger folk into their Assassin's Creed will appreciate the concept of playing in a literally cool game.  The inbetweeners who fancy an itellectual as well as emotional ride may want to pick their intellectual chip on the way out of the theatre.

If they forget to, the film that dare not speak its name will be screaming all the way through this plot, which consists so much of back stories, that intertitles at the start might have eroded the need for large tracts of narrative.

Matrix! There said it!

Tron's franchise owners will feel unnecessarily hard done. They were there before the Wachowski brothers; in fact it's conceivable the brothers may have been influenced by this 80s ground breaking sci-fantasy.

If Tron 3D legacy had a lot to live up to then by its own standards, it had the looming shadow of one of the most impressive sci-flicks ever to contend with and sadly it does a poor show of it.

This was a formalist film exploring abstract ideas but not quite pulling it off. But not to worry; if it's a visual spectacle you're after, you'll be subsumed into the grid and a world of anatomical hugging fashion garments and the plotline of Bridges fighting himself is an intriguing feat of CGI.