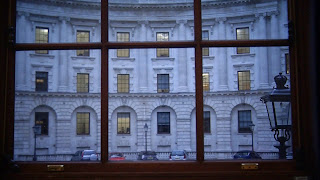 It's an unavoidable societal activity for this time of the year. The quiet before the tempestuous inner turmoil.

No not the torment across the table from relatives you haven't see in 11 months. Ah yes, there was a reason you avoided them.  Nor the sibling rhetoric: "D'you remember when you mocked my pet hamster?

You: Yes, her owner has since become barking bonkers.

No, here I speak of taxes. There's a subject to wreck an Christmas dinner. Sorry!

A local tax expert, Guy Bridger I have come to know is flesh and blood; the collorary for many others - you get my point.

He's also deeply conscientious having worked in the field for a good many years with a deft understanding of advising creatives.

A couple of weeks ago he had an idea, which yesterday led to a visit to the institution which over sees  national taxes, The Treasury. His idea is universal enough to cross national boundaries.

There followed an interesting conversation with an official. Unfortunately I can't say much about it, as quire rightly so, I have agreed to comply to my own self-induced NDA on Guy's behalf.

Meanwhile behind-the-scenes I have started shooting the story. It'll take many more shoots to complete the story, as it's not just about what he has discovered, but about him and his beliefs.

And if his hunch is right, and I in my small wisdom believe it so,   Christmas may be one element free of stress from the thought of an appointment with Mr T.
Posted by Dr David Dunkley Gyimah at 2:31 pm