Journalism's deja vu why... the past matters 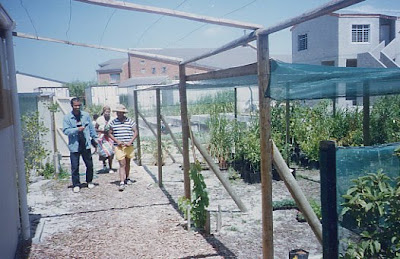 David as a freelance World Service radio journalist in Cape Town settlement in 1992
I'm peering through the window; the fans of my hard drives are now audible - an irritant, almost.

And I have now seen fit to turn of the other two monitors, three will do fine for the moment. Yes I am a screen geek, but that's for another day to banter.

Journalism's deja vu and why the past matters is a reflective thought from building up a list of to dos for a study, which is also the making of a film I'm investing quite some time in.

It goes back to 1987 as seen through my eyes, an interpretive approach to the changing media. Oh how the past really matters, as I popped open a Hi8 (obscure thing) to watch on its designated player and rolled tape from the settlements of Khayelitsha.

For once, now we might truly recognise there is no grand scheme, no jewels of utter profound thought - though there are shards of occasional brilliance - in manufacturing media.

The year of 1987. Thatcherism. And how desperately I wanted to work in broadcasting. I'm black, a chemistry undergrad transitioning and haven't the foggiest how I might soon transmorgificate myself from post studentism to broadcast professional.

I wrote a piece for our student newspaper, a heated debate at the university about the emergence of AIDS from Africa discovered in Reese Monkeys. Yep!

Black is important. In 1987 colour was heavily politicized, student affairs was akin to a class struggle.

Later in 1992 when I landed in South Africa and was summarily invited onto prime time radio, you could forgive the host for asking the number of blacks who worked in broadcasting.

Journalism back story
Reflection! What was once so, those distant times, why do they matter? Because journalism thought it never had it so good, short term views ran the course, the beneficiaries of the so-called professionals arbitrating on our behalf, became a self interest.

The past matters for context.

Over the years any number of outfits have changed, shed past ways, looked to the future, shed some more past ways and then made pronouncements about how right now they are in the here and now.

We heard it on the news again this week with the BBC's new policy javelin spearing two hitherto stations, you've probably never heard of. Martin Sorrell, the Stan Lee of advertising says we're (advertising) back. You can wheel the patient out of the critical room.

How prescient of Oliver Stone to resurrect Gecko. There's a looming irony.

Never mind hindsight, but its worth asking and firmly if you're privy to the change business. We all are as consumers, so how really different will the future be? For one thing our views of truth, Walter Benjamin suggests, which is shaped by institutions, by any account has not gone the way of the recession.

There is disquiet over the Tories intended fisticuffs with broadcasting should they toe poke the election. It looks too much like Murdoch's manifesto says the Guardian's Jonathan Freedland

.."the BBC has decided its best strategy for self-preservation is to suffer a little pain now to avoid a lot of pain later".

There is a sense we might be slow walking, not into old ways - that's not possible - but parallels of ways we've co opted that reference those ways.

We've sniffed a bit of lax in the system, but it's only a bit and apart from the odd subject agendas are made in corporate boardrooms.

All Change
And journalism, well it still hasn't fully recovered, question is when it does will it be the one of old or a new one in place - hardly a topic to debate really?

So why does my longitudinal study and the forsaken tapes I have kept from my first broadcast to recently running around Beirut training matter?

Well context Watson, context! Will comparisons with the past truly show how earth-moving this flux has been? Is the change we're witnessing a symptom of Darwinism - evolving - rather than a revolution?

To academics who chew the cud of words such lengthy studies are boringly necessary, because they often reveal not som much the changes made, but what was missed and truly could have been monumental.

Like I said, the next pronouncement you hear from your favourite media will be telling you how they've now got it so right, journalistically, in employment (don't mention the CDN), and socially.

You'll find out whether that's the case in another ten years time.
Posted by Dr David Dunkley Gyimah at 3:17 pm