How tos.. film and pull off the big interviews - Videojournalism 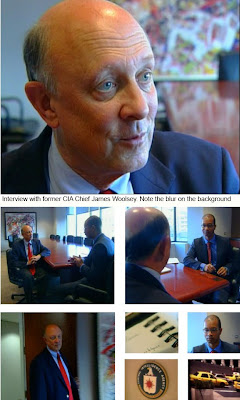 One of my many interviews. This one with the former head of the CIA, James R Woolsey, which took place in Washington DC.

It forms a series of "how tos?", including interviewing Nelson Mandela at a Press Conference, to the great an late Eartha Kitt and turning the tables on my old friend Riz Khan. The how to exposes tricks and tips through out my career and some great flaws.

I was once mortified after my equipment failed me interviewing Sir Douglas Hurd, a high ranking Tory and then member of the Conservative government.

So I'm disappearing from these pages for a while as I have a number of deadlines. Admittedly I can't help the occasional quick blog, but all my writing and time is going into two big exercises.


Did I tell you I actually like making videos? I have got a couple more to produce, including a TED like interview featuring some of the most amazing thinkers I have come across e.g. Zann Gill, a former NASA personnel, is building the next social network as part of a study for her thesis.

Bruce Damer, another NASA person, is attempting to create life from nothing other than a computer simulation. They and others truly inspire me.

Inspiring people
But alas there are only 19 hours in a day, which starts at 6 a.m and concludes at 1 p.m. I have posted some new vids on Viewmagazine.tv including an interview with the fantastic Brian Storm founder of MediaStorm, whose work is mind-inducingly trail blazing.

I'm rebuilding parts of my site from html to css etc. Tomorrow I'm looking forward to seeing what our International Masters students are doing. They should be online with their new ventures.

I'll post a link for you to see the fruits of the six weeks labour with Flash, Css, Photoshop - and more importantly understanding the semiotics of online

Having watched "Hurt Locker" I was going to change the interface of viewmagazine.tv to show how to replicate the DVDs titles. I might do, but truthfully I'm up against time.

Still if you're a videojournalist or an outfit I'd love to hear from you.


We are what we repeatedly do.
Excellence then, is not an act, but a habit
Aristotle
Posted by Dr David Dunkley Gyimah at 8:26 pm