Visioning with UK Sport body CCPR at their CEO Convention.

"What did you think? I thought he was alright. Couple of things he spoke about I didn't quite get, but yes I think he provoked thought.

Actually I disagree, I don't think he went deep enough."

It's two weeks since the UK's sports umbrella body's big gathering on November the 18th/19th and execs are assessing the feedback.

I'm David but I thought what would it have been like to sit in the audience and listen to me, so briefly I have made up this pseudonym, Jason Edwards, from the federation of Touch Rugby, based in Falmouth, seated in the audience. Jason brings together some of the feedback I received afterwards. I guess the really bad ones would not have been said to me face-to-face :}


Jason Edwards writes
I liked the videojournalism. I hadn't heard of it before so that got me thinking, but I would have wanted more specific examples, but it was interesting to see how he conducted a live interview.

He covered a number of things, perhaps a bit too many, but I found I was cherry picking. Social Networks is something I already know about. I got the sense that he wasn't in favour of them or had issues, so I would have wanted to have known more.

I guess yes, its difficult when you're having to address members in which we're bound to have varying needs, but he seemed to know his stuff. He moves about on stage a lot, which for me was a little bit distracting, but that's a small matter.

My needs at the moment are not so much the use of these new tools, but its impact on our corporate policy. It's alright to look at these networks and say you need Face book, and Twitter, though David wasn't saying it that way, but we have to be careful with our brand and the way we communicate with traditional and new constituencies.


Jason's response, also blogged, found its way to David who posted this response. 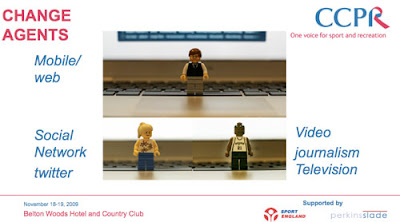 It was good to hear your feedback and thanks for the grading :). I entertain all comments. It's what makes us, me, grow, so thank you.

I spent considerable time thinking about the pitch for this eminent event.

All talks have their different dynamics and so I donned my lecturing hat, media coat and artist shoes to work the room. The shoes, maybe that's why I walk around so much.

You probably didn't know this, but I had a couple of videos teed that were specific examples of sports, and more importantly would have, I hope, given you time to breathe in between my talking and perhaps reflect on some things I might have just said.

Videojournalism Sports promo video - see here for report on Channel One
Sadly a system Adrian, the technical wizzard, and I had worked out to trigger the tapes went South. And I got so deep in the zone that I missed the cues. Hahahaha Lesson learned for next time.

I tried not to go too deep as I figured that would be slightly unfair to those approaching this for the first time. However, lets continue to stay in touch, and hopefully we can share some mining-shaft stuff.

If anything there were a number of thoughts I wanted to get across.

I promised Sallie Barker Head of Services for CCPR that I would write an executive report, which I will with video inserts from interviews and links to useful sites and strategic points, so do come back to me/viewmagazine.tv in about a fortnight's time, or less.