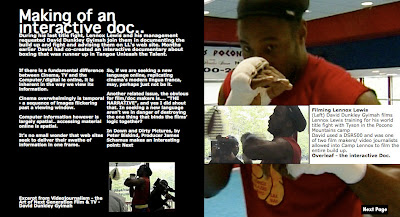 David recalls the experience of mind over matter as one of the film makers of the heavyweight champion of the world, lennox lewis.
On an afternoon in the hotel, having just completed a morning shoot, ringside. My friend and exec producer delivered a boxing lesson redolent of life's experience.

I had dared uttered the statement: "If Lennox Lewis wins.....".

Kofi, one of Lenox's right hand men, literally flew of his chair in mild rage

"What do you mean, "if". David, there are no ifs here. You disappoint me".

He had reason to. I had been invited. In fact rephrase that: I had been hired by Lennox Lewis to be one of his documentarists.

If you could see me. I was the cat with the cream.

Many outfits and journalists had requested to be part of the inner sanctum of one of the most anticipated fights in contemporary boxing history: Lennox Lewis vs Mike Tyson, and I had ring side seats.

And now I was about to blow it. 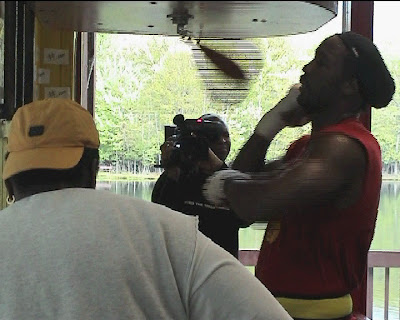 Over the days watching Lennox train though something happened, I found myself in conversation with a journalist and to my own amazement was chastising him for very comments I had made earlier.

I had turned. No longer an objective bystander, I was now a believer. It was extraordinary. The evangelical belief inside Lewis' camp had an intoxicating affect and I was drunk.

Watching the build up to Haye's vs Nikolay Valuev, I might imagine that Haye was wrapped in his own inexplicable, but explosive, self-belief.

It seemed impossible and if anything there would have been a fair number of people whom I'd imagine would have wanted the Russian to shut him up.

But yes he did it. And the event brought back that sense of purposeful belief I came across during Lennox's fight.

Before the big fight Lennox takes a cat nap. He is a figure of serenity. And then with minutes to spare he walks through his tactic: jab, jab, punch.

The biggest stage was set for an explosive fight, but in many ways the fight had already been won in the head of Lewis' camp. The mind conquers all. A lesson we could all learn, a lesson that Haye punched home yesterday.
Posted by Dr David Dunkley Gyimah at 2:43 pm