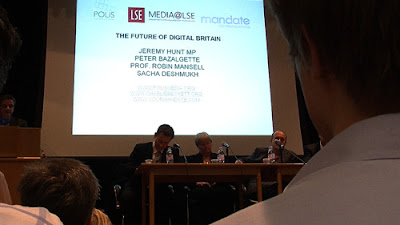 Media expert Peter Bazalgette says the Guardian is in trouble.
Jeremy Hunt MP could be the next Secretary of State for Media, Arts and Sports, so it would be wise to listen to him as well as secure an interview.

I'm yet to work on the latter, but in between a panel discussion and drinks, that grey zone after a conference I managed to catch him for a few words.

Firstly, did he have any strategy for helping media employment with the many students who will graduate and find themselves competing in the jobs-for-the-boys-and-girls-market?

Secondly how would his strategy for sports differ from Labour in view of the ping-pong, indeterminate approach to sports the government has attracted from critics.

Crickets return to terrestrial TV seems to smack more of retribution to Murdoch than an honest plan say the detractors.

And Lord, good lord what's going there. You might as well sell Buckingham Palace

Big Digital Question
Both big questions said the shadow minister, trying to get away, nicely, before doing the Clinton touch reminiscent of Primary Colours. 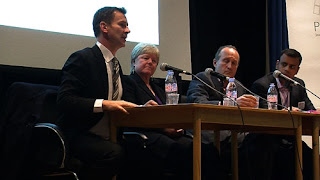 "What's your name?", he asked, before repeating "David Dunkley Gyimah" and adding "google me for my email and send me an email".
Conference-afters, everyone wants to get away and when you're accosted by me - part geek looking, part soul-man-gone-wrong, sporting chinos, army walking boots and a tweed jacket - you sense the pace quickens.

I blame my parents for still looking like a 20-something, when I graduated uni more than twenty yeas ago.

This was a select crowd so I was thankful for the invite. The evening itself was empathetic of the big themes, even though wasn't time enough to drill into particulars.

Digital Highlights
But the highlights were as follows.


I recorded part of the proceedings and will put that up later part of the weekend. Here MP Jeremy Hunt answers a saving local media.

Hunt's future of media was that the net would be tv and tv the net. Not so foolish, me on viewmagazine.tv, after all.

p.s Thanks to Charlie Beckett for the invite.
Posted by Dr David Dunkley Gyimah at 11:13 pm