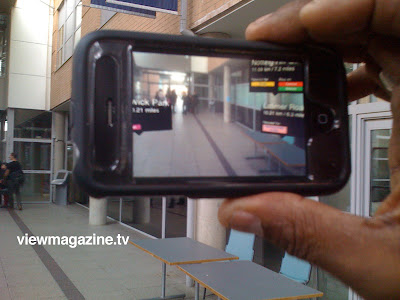 Augmented reality has arrived - on the iPhone. Icons that float geopositionally, proving a range of services Jack Bauer 24 would dream of.

Augmented reality is by no means new. Four years ago I spoke Adam Clayton Powell III about his work which has attracted mass attention, including the military.

With the iPhone we're not there yet, but the leap into star trek technology no longer looks as such.

Meanwhile the combination of outernet screens and iPhone apps means remote control takes on new meaning. As demonstrated by a friend and I hope to bring you video soon, he's been controlling his Mac via his IPhone 20 miles away

We're moving into new territory and the phone is fulfilling what experts declared would be a seismic next tech revolution.

But we also know there have been advances in public screens and gesture technology. The Screens featured on Apple Pros site no longer see that far fetched.

It all adds up. And the beneficiaries of this are many, but my attention is to content dissemination.

My work in videojournalism is steadily progressing and I can see rich seams of interest between these disciplines.

That much I will be telling a CEO group next month. The future of the future is the present said John McHale. At times it looks like we're overtaking the future.

Languages and semiotics are being remodelled and it will be a brave soul now that isn't experimenting in the "white heat" of moment.

Art collides with journalism which transfers entropy symmetrically to technology, which impacts on aesthetics ( sensorial definition)

It has never been a more fascinating time to be called a factualist ( journalist).
Posted by Dr David Dunkley Gyimah at 7:48 pm